To enter into the path of bhakti is rare. And even rarer is to sustain that bhakti and to
progress in it. To sustain and progress is key. How can we do that?

For this, the only thing we need to ensure is that what we ingest through the ears is of the
highest quality. Then the rest of psyche will be taken care of. Only this ‘portal’ needs to be
focused on. 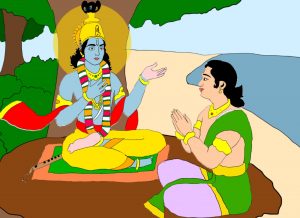 Bhagavan Sri Krishna says to Uddhava Swami, “As much as we involve and drown ourselves in listening to Bhagavad katha, to that extent, as we listen to the Katha, it applies collyrium (anjanam, kAjal) to our eyes and makes us see things clearly.” (Uddhava Gita, Srimad Bhagavatam 11:14:26)

Although the katha goes in through the ears, it results in our clarity of vision. It changes how we see things in our heart and mind. Sant Kabirdas sings “guru krupA anjan pAyo mere bhAi…” (I have received the collyrium of Guru krupa!) How does the Guru apply that ‘krupa anjanam’ in our eyes?  By giving us ear drops (of Bhagavad katha) he clarifies our vision.  When we have clear vision, we naturally will not take unnecessary decisions that are harmful to our own progress in bhakti.  Why?  Because we begin to ‘see through’ the things of the world and are not attracted or infatuated by them.

Bhagavan constantly emphasizes the importance of shravanam.  But notice that He says that our clarity of vision and progress in bhakti is proportional to how much we immerse
ourselves in the divine katha.  This immersion is not just in how much time we spend listening to katha, but it is also in how much we contemplate on what we listened to.

Bhagavan also tells Uddhava Swami the secret of how to retain what one listens to. He says, “shraddhA amrita kathAyAm mE, shashvan mad anukIrtanam…” (Srimad Bhagavatam 11:19:20) is the first step into the escalator of bhakti.  Listen first to My immortal and nectarine stories (from a mahatma).  Then repeat it and contemplate on it!

After listening to katha, we need to speak to someone about what we heard, or tell it to
ourselves, or write about it, or contemplate on it in one way or another! This step,
mahatmas say, is very important.  Once we do these two (shravanam and anu-kirtanam), the rest is taken care very quickly.

In Srimad Bhagavata Mahatmyam, we see the story of Dhundhukari the sinner who became a disembodied spirit with apparently no way to escape his state of agony and despair. But he found solace in the mahatma Gokarna, who out of extreme compassion, prayed for him and learnt that a Srimad Bhagavata Saptaham could release Dhundhukari from his piteous state. Gokarna installed Dhundhukari in a bamboo cane and began the 7-day exposition, that was also attended by numerous villagers. At the end of the Saptaham, the entire bamboo split and a beautiful four-armed being, a Vaikunta-vasi, stood in front of him.  When Gokarna asked him who he was, he said he was Dhundhukari! Because he had listened intently to Srimad Bhagavatam from Gokarna, he had not only been released from his depraved state, but been bestowed with the highest state of Vaikunta itself by Bhagavan!

When all the villagers saw this wondrous happening, they asked why they had not been
bestowed that exalted state even though they had also listened to the same katha from the
same mahatma, and had also committed far less sins (than Dhundhukari). When Gokarna
asked this question from the villagers to the Vishnu pasharas who had come to take
Dhundhukari with them to Vaikuntha, they replied that the difference in result lay in the
way Dhundhukari listened as opposed to how the others did. The villagers had all listened,
but they had only listened with the ears. They had not listened with their hearts or
contemplated on it. On the other hand, for Dhundhukari, this being the last straw for him to escape his state of extreme distress, he had listened to the katha with his entire being; with immense shraddha, and had constantly contemplated on the katha for all the seven days.  This had taken him to the highest state, even though he had been the most depraved sinner previously. (Our past does not matter when it comes to Bhagavan’s grace.)

Because the villagers listened with their ears to the divine katha, they were able to see and
hear the Vishnu pasharas! If we listen with the heart, we can see Bhagavan Himself!