This month we will be visiting the holy town of Kanchipuram. One cannot explain the holiness of this town in words. It is one of the seven mokshapuris (towns that bestow liberation) and the only mokshapuri in South India. 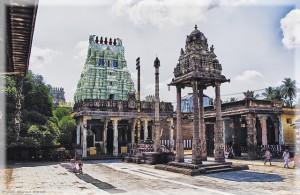 Lord Vishnu appears famously in Kanchipuram as Varadaraja Perumal, which is a divya desam kshetra. The Varadaraja Perumal shrine itself is situated on a small hillock known as Hastagiri and devotees have to climb 24 steps to have darshan of the Lord.

Another specialty of this temple and deity is the famous Garuda sevai (vahanam) during the annual brahmotsav celebrations, which is special among all Garuda sevais and is also mentioned by Sri Swamiji in his kirtan below.

Meaning
Sing of Varadaraja, sing of the King of gods!

He resides in the holy town of Kanchi, He bestows all boons one wishes for
His beautiful form captivates the hearts of his charmed devotees

He lives on the banks of River Vegavati, He is One who nurtures the Vedas
He protects the one who surrenders and castigates the demons
He is mounted on Garuda, He is the embodiment of compassion
He is One who yields fruits from the tree of Muralidhara’s merits!