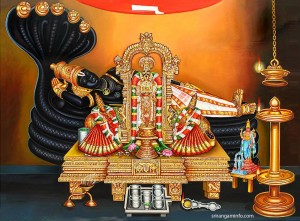 The One whose ears are adorned with earrings shaped like crocodiles that reside in a lotus-pond.

The One with lotus hands that are nimble, who loves to sport pastimes

The One whose form resembles a blue lotus, Thy Lotus hands are The Lord of Murali.