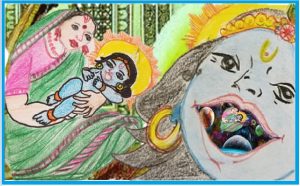 Last month, we saw how the entire Gokula rejoiced in the mischievous butter stealing pranks of Lord Krishna and Balarama. The Gopis, under the pretext of complaining to Mother Yashoda about her darling son, reminisced His beautiful leelas. And Mother Yashoda too, for her part, did not believe anything they said and instead smiled at them and defended her son’s innocence.

Days passed. One day, Lord Balarama and other playmates of Lord Krishna came running to Mother Yashoda and complained that Krishna was eating mud. On hearing this, Yashoda Mata went running to Krishna and questioned him.

kasmAt mridam adAnta Atman bhavAn bhakshitavAn raha: |
vadanti tAvakAhyete kumAraste agrajopyayam. || S.B. 10.8.34
Why did you eat mud in this solitary place, you naughty (uncontrollable) boy!
All your friends including your elder brother (Balarama) are saying so!

Mother Yashoda admonished the Lord out of concern for His health. She said that everybody including His brother was complaining about Him. When the Gopis complained, Mother Yashoda defended her child. But here, since Lord Balarama himself complained and because this was a safety concern, Mother Yashoda chided our little Krishna.

The Lord then innocently replied,

nAham bhakshitavAn amba sarve mityAbhishamsina: |
yadi satya-giras tarhi samaksham pashya me mukham || S.B 10.8.35
O Mother, I did not eat mud. Everyone is complaining so that I may get in trouble with you.If you consider it to be true, then look into my mouth.

If we take this sloka literally, then it appears as though the Lord is uttering a falsehood. How can the Lord, whom the Devas praised in Chapter 2 as “satya vratam, satya param, tri-satyam…” (He who is the embodiment of Truth itself!) utter such a falsehood?

To truly understand such slokas, one needs the commentary of Mahans. Sri Sridharacharya whose commentary, Sridhareeyam, is considered the authority on the meaning and purport of Srimad Bhagavatam says that the Lord in fact speaks the truth here. Since this entire creation is inside the Lord’s stomach, the mud is also inside Him.In that case, how can one eat something that is already a part of Him?

Mother Yashoda then said, “If that is so, then open your mouth.” On being ordered thus, Lord Hari, whose affluence is limitless and who was sporting as a little human boy, complied.

And when He opened His mouth, Mother Yashoda was transfixed by the sight she beheld! sA tatra dadrushe vishvam… She saw the entire universe – the movable and immovable objects, the mountains, the seas, the islands, the entire earth and other worlds; the sky, space and so on along with Vraja bhoomi and herself as well. On seeing this astonishing vision in her child’s mouth, she contemplated if what she saw was a dream or an illusion or some power of her child. Bewildered, and realizing that what she was seeing was beyond her comprehension, she surrendered to the Supreme Being.

Sri Narayana Thirtha has taken this bhava of Yashoda and composed a beautiful song, “gOvinda ghaTayAnandam paramAmnAyagOchara…” where she, forgetting the world, she extolls the Supreme Being.

After giving her this realization, the Lord himself then made her forget this Supreme Truth so she could once again shower her love on Him as his mother. Because He preferred her to love Him as a mother, feed him, bathe him, admonish him and so on rather than giving her the knowledge and having her extolling Him as the Supreme! The Lord is indeed bound by His devotees!

Sri Swamiji has enjoyed this leela in several songs. We will enjoy one such song which contains both the butter-stealing as well as the mrith bakshana leela (eating mud).

Slowly, slowly he comes
He steals butter and milk and gives it (to His friends)
If He is caught red-handed
He cries rubbing his eyes.

If we take him to His mother,
He rebukes, chides and threatens us
He unties the calves
And laughs heartily.

He enjoys eating mud
And He creates magical illusions!
The One who measured the three worlds with His foot ages ago,
That Supreme Being is none other than Me, He says!