Childhood pastimes of Lord Sri Krishna and Balramji in Vraja 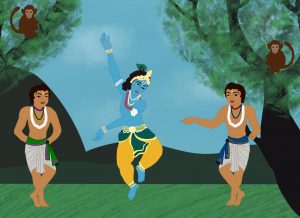 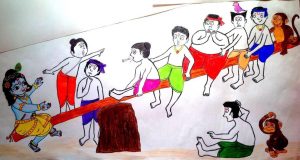 In Krishna avatara, Bhagavan’s lilas can be categorized as Brindavana leelas, Mathura and Dwaraka leelas, Hasthinapura and Indraprastha leelas. Brindavana, Mathura and Dwaraka leelas are described in detail in Srimad Bhagavatam by Sage Vyasa.  Brindavana leelas are all madhura leelas. All the Bhagavatas in Brindavan – Yamuna Devi, Govardhana parvatham, the Gopas and Gopis had unprecedented love and devotion for Krishna. All the living and non-living entities in Brindavan loved Bhagavan very dearly and Bhagavan in turn showered His compassion on them.

Having enjoyed and relished the greatness of Brindavan and the bhava of the Mahatmas, we shall now go on to see the merriment Krishna and Balarama shared with their Gopa friends as keepers of the calves. “GochAranam“(herding the cows and calves) is Bhagavan’s nithya madhura leela.  Bhagavan who is the sole preserver of the entire creation desired to be the protector of the cows and called himself “Go-palan”.  He was bent upon taking up the task of herding the calves. He brushed off all the concerns of Mother Yashoda and convinced her in every way possible to let him go. Nandababa was actually very happy to see his son’s eagerness and felt  proud.  Sri Oothukadu Venkata Kavi describes this exchange of lovely conversation between mother Yashoda and Krishna in detail in his very popular song – “Maadu meikum kaNNe”.  Mother Yashoda after giving Krishna a cart load of advice, got him ready for the first day of His job as a calf-keeper!  She combed his locks of dark curly hair, made a nice small pig-tail and inserted with a beautiful peacock feather. She applied kasthuri thilak on his shiny forehead, garlanded his neck with “vaijayanthimala” and a necklace made out of gunja beads.  She tied the bright yellow garment around his waist, gave him a stick in his hand to tend the calves.

Carrying His flute and blowing the horns, Krishna and Balarama happily left with some curd rice packed for their afternoon meal.  Balarama and Krishna felt such joy being in Brindavan.  They tended the calves and played in the pasturing grounds with their friends. They played various games – sounded sweet notes on the flute and hurled stones by means of slings. They played like bulls and mimicked animals of various kinds.  They spread their hands and feet like frogs and croaked in the river banks of Yamuna and plunged into its waters. They played hide and seek and jumped like monkeys from one branch to the other.

While these cowherd boys played with Krishna in the sandy banks of  River Yamuna in this manner, a demon assumed the form of a calf and joined the group of calves. Krishna, as innocent as he looked, very slowly approached the demon – vathsAsura, as if He did not understand the demon’s intention.  He caught the demon by the hind legs and tail, twirled the demon’s whole body and threw him onto a wood apple tree. All the fruits from the tree fell down, along with the body of the demon, who had assumed a massive form. NAchiyAr talks about this leela of Bhagavan saying – “kazhal potri” – glory to His divine Feet! NAchiyAr’s madhura bhAvam makes her admire Bhagavan’s Lotus Feet tingling with anklets.

Yet another day, there was this another unusual animal visitor, a huge heron – Bakasura which was as big as a mountain.  It tried to attack Krishna with its pointed, sharp beak but Krishna caught hold of the gigantic heron by the two halves of its beak and tore it apart like splitting a blade of grass.  The cowherd boys were filled with wonder at seeing this heroic feat of their dear Krishna.  They affectionately embraced Him and all of them together returned to Vraja.

This way Bhagavan Krishna and Balramji roamed around the forests of Brindavan, their Lotus feet with the tingling anklets gracing and caressing its soil.

Sri Swamiji in this kirtan fondly admires this beauty of Lord Krishna playing and sporting in the forest of Brindavan.

The sound of Your tingling anklets – “chal chal”,
Draws my mind towards You,

The one Unparalleled in beauty – O Kanna! You dance and sing in the forests of Brindavan

I surrender unto You, The One clad in bright yellow silk garment – Oh Compassionate One!
To me who has been beseeching you, overlooking my flaws and without disappointing, please reveal Your beauty,