For the first time, GOD USA conducted a three-day satsang series in Portland, Oregon. Sri Poornima ji discoursed on ‘Bhagavata Dharma Saaram’ from February 3rd to 5th, 2018 at the Balaji Temple of Portland, OR. Sri Poornimaji beautifully expounded on the greatness of the path of Bhagavata Dharma and Nama Mahima. She began the discourse series saying that one needs the grace of the lord to come and listen to discourses and to be part of satsang. She beautifully said that satsang is verily the fruit of one’s good merits [punya] and it is not divorced from the normal practical life. Satsang is the verily the place where the Mahatmas show the right direction for searching happiness and being happy always. When one follows dharma properly, the lord becomes happy and gives himself to the devotee. When the lord decides to give himself, Srimad Bhagavatam says the Lord chooses that jiva and bestows him with a satsang. Satsang is indeed the final benediction of the lord which is not a path [sadhana] but the end. The lord sends Sadhus and spreads the beautiful fragrance of Bhagavatha Dharma which is based on Namasankirtan. It was pioneered by none other than Azhwars and Nayanmars who propagated the path of Namasankirtan. On the final day of the three-day discourse series, she beautifully expounded on the life-history of Ajamila frm Srimad Bhagavatam.
She concluded the wonderful three-day lecture series by exhorting everyone to chant the divine names of the lord. She said one can chant any divine names of the lord but then specifically said that the Mahamantra will connect to the lord quickly as mentioned in Kali Santarana Upanishad.
Around 25 to 30 people participated in the satsangs on all 3 days and enjoyed listening to Sri Poornima ji’s katha. 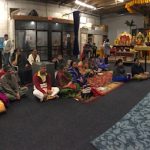 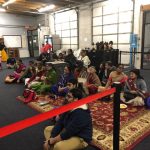 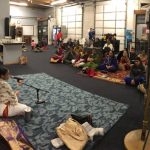 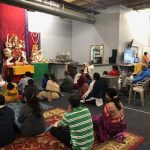 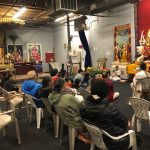 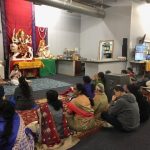 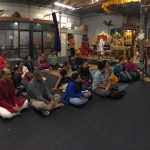 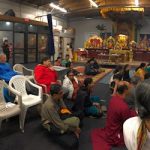