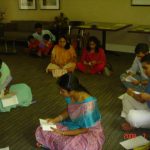 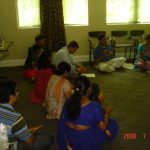 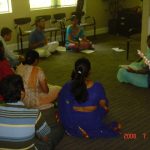 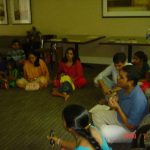 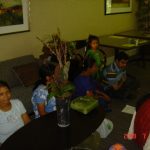 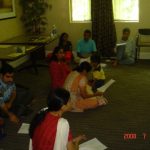 By the grace of Sri Sri Swamiji we, the in New England(Boston & New Hampshire) had a wonderful Guru Poornima satsang Kimball Ct Community Hall. About 25 people participated in the satsang. The program started with Vishnu Sahasranamam parayanam. Following this Narayananji gave an introductory speech about the reason to celebrate Guru Poornima, importance of Namakirtan and its relevance in this Kali yuga.

For the next 20 min, the hall reverberated with the Mahamantra. This was followed by Bhajans lead by Gayathriji where we sang the following songs :

The devotees offered flowers and Namaskarams to Sri Sri Swamiji and Sri Premika Varadhan. The event concluded with a closing speech by Nithyaji on the ‘Why Mahamantra’ and the Power of ‘Rama’ and ‘Krishna’ Nama as ‘Pavana’ and ‘Prayaschitha’ Nama. Narayananji added that if any one wished to host a satsang for Namakirtan, the devotees would be more than willing to join the hosts.

Mahamantra CDs and stickers were distributed to all devotees in the satsang. In Sri Sri Swamiji’s words ‘All who chant Nama are my kith and kin’, a whole bunch of new relatives from Woburn joined Sri Sri Swamijis circle. It was also announced that regular weekly satsangs will be conducted at Sri Narayananji’s residence on all Sundays from 3:30pm to 4:30pm EST.