The Nadotsavam competition in Minnesota is conducted in a grand manner each year in the presence of eminent and highly accomplished musicians from India. This year, the judges included the Carnatica Brothers, Shri. K.N. Shashikiran and Shri. Chitravina Ganesh, Shri. Cherthala Renganatha Sharma, Shri. Thanjavur Murugabhoopathy and other musicians.

Minneapolis GOD Satsang group was awarded the First Prize for the rendition of Sri Swamiji’s Madhuragitams and received wonderful compliments from the judges. A special mention was made about the lyrics of the composition, Gambhira Srinivasa set to Ananda Bhairavi Ragam. One of MN GOD Satsang member, Ms.Pavithra Radhakrishnan was awarded the title, Bhakti Star of 2015.

All glories and pranams to Sri Swamiji and MN GOD Satsang eagerly looks forward to take Sri Swamiji’s divine compositions-‘Madhuragitams’ to the Cleveland Thyagaraja Festival in the coming years. 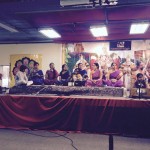 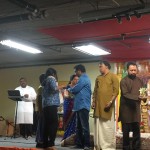 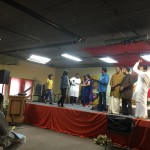 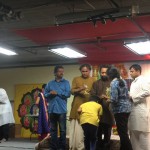