Srimad Bhagavatam is so called not only because it contains the stories of Bhagavan but also because it is filled with stories of bhagavatas, the devotees of Bhagavan. These stories illustrate to us the qualities needed to attain Bhagavan and the state of those devotees. The fourth canto of Srimad Bhagavatam thus illustrates the quality of perseverance, through the popular story of a young devotee of the Lord, Dhruva; perseverance and determination which won the little boy the highest – Guru’s grace, Bhagavan’s darshan and His abode.

When Dhruva, the son of King Uttanapada’s spurned first wife, found out that the king was his father, he was filled with the desire to be with him. The five year old walked fearlessly to the court and tried to sit on his father’s lap. But he was thrown out by his stepmother who spitefully advised him to propitiate the Lord to be born in her womb first before trying to sit on the throne. 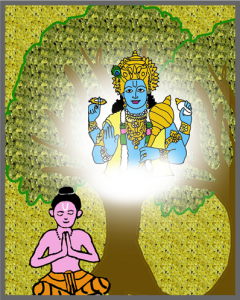 Wounded by the sharp words, Dhruva ran, full of hurt, anger and tears, to the safe hands of his beloved mother. She pacified him, and virtuous as she was, asked him not to think ill of his stepmother. Instead she encouraged him to worship the Lotus Feet of Sri Hari, the Father of the Universe, who was the only One who could truly wipe out his sorrows, protect him, and make him ascend the throne.

As soon as he heard these words from his mother, Dhruva, though only 5 years old, set out to the forest to see Bhagavan. A Guru always crosses the path of a true aspirant. And when he does, he first tests the aspirant’s resolve in the path towards God. Thus it was that Sage Narada came upon the little Dhruva walking determinedly alone in the forest.

When Narada found out that the boy was going in search of God, he immediately asked him to return to the kingdom. He warned of the dangers of the forest. Dhruva was undeterred. Narada  offered to take him back and speak to his father so that Dhruva could sit on his lap. Dhruva asked if Narada would be there the next day if his stepmother pushed him out again. Narada tried to convince Dhruva that unhappiness and discontentment result from one’s own actions, and that one should remain satisfied at all times, accepting the sorrows and joys as Providence. Dhruva did not buy the argument even for a second. Then Narada warned Dhruva that the Supreme Lord was hard to reach even for yogis who practiced rigorous penance for numerous births. Dhruva said that with the Guru’s grace, anything was easily possible. Little Dhruva had won the heart of Narada with his love, determination and perseverance. He had passed the test.

Dhruva faced many deterrents. He had to leave the secure and nourishing surroundings of his loving mother to tread the unknown and unsafe grounds of wilderness.  His resolve and initial enthusiasm were tested with his Guru’s words asking him to return and accept everything as fate. Finally, the complexity and uncertainty associated with his desire (to see God) was itself a profound impediment. Yet there was nothing in the entire world that could change the heart of this young boy. His perseverance ultimately won him his Master’s grace.

Overjoyed with 5-year-old Dhruva’s honest resolve in this highest path that is uncared for by millions in this world, Sage Narada took Dhruva under his wing, initiated him and described to him the form of the Lord, thus installing Him in Dhruva’s heart. He then told him where to go, what to do and what to ask Bhagavan when He appeared before him – satsanga. In essence, the Guru took care of and guided every little step of the aspirant who had nothing in his quest to start with, except his strong determination and resolve.

The rest is history. Dhruva persevered in his penance, following his Guru’s instructions. Subsisting only on fruit first, then only grass and leaves, then only water, only air and finally attaining complete control of breath, Dhruva stood like a pole on one foot contemplating on the image of Bhagavan installed in his heart. Thanks to his Guru’s grace and his unrelenting, strong perseverance, Dhruva was able to attract the attention of Bhagavan in merely five months.

The most compassionate Bhagavan descended to Madhuvana to see the young Dhruva, whose determined penance had thrown the entire cosmos off-balance! Pleased with him, Bhagavan blessed him immensely, granting him a long reign and at the end of it, a special abode in the skies as the Dhruva nakshatra surrounded by the Sapta Rishis, thus giving him the permanent satsanga he had asked for.

Sri Sri Muralidhara Swamiji, in his work, Kali Dharma Undiyar, says “dhukkam varuvathum iraivanin aruLAlE, virakthi vaLaravE unthIpara! vArAthAyin vINE unthIpara!” (It is only due to deep compassion of the Lord that sorrow strikes a person; so that he may develop dispassion to the world and turn his attention to the Lord. If this does not come, then life would be in vain! )

So, one should strive to attain the Lord. Can there be a clearer paradigm of how unwavering one should be when it comes to attaining Bhagavan, than what the five- year-old Dhruva has shown?