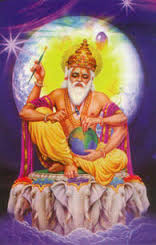 We often come across the name “Vishwakarma” in many stories from the Puranas and Itihasas. But little do we know about him except perhaps that he is a heavenly architect. In some parts of India, Vishwakarma Puja is celebrated around this time of the year. Let’s use this opportunity to learn a little more about this talented engineer!

1. Who is Lord Vishwakarma?
A. God of Strength
B. God of Craftsmen and Architects
C. God of Knowledge

2. Name the architectural wonder built by Vishwakarma in the Treta Yuga:
A. Lanka
B. Ayodhya
C. Mithila

3. Name the magnificent city that was built by Vishwakarma in Dwapara Yuga:
A. Mathura
B. Puri
C. Dwaraka

4. Which city did Lord Krishna request Vishwakarma to build for the Pandavas?
A. Indraprastha
B. Kurukshetra
C. Mathura

5. Name the architectural accomplishment of Vishwakarma in Satya Yuga:
A. Swarga
B. Naraka
C. Kailash

6. In which town in India is Lord Vishwakarma’s temple located?
A. Howrah
B. Hastinapur
C. Mandi

7. Vishwakarma is generally said to be the son of:
A. Lord Shiva
B. Lord Vishnu
C. Lord Brahma