In this quiz, we shall experience the glory of Lord Rama and the greatness of  Rama Nama  from the nectarine verses in  the divine Sri Madhurageethams of HH Maharanyam Sri Sri Muralidhara Swamiji. 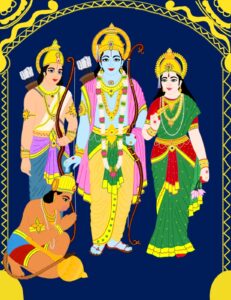 3. Sri Swamiji composed this Sri Madhurageetham ___________ on Lord Rama located on the banks of the river Godavari.
a. champakAraNya kShetra bAla
b. bhakta vatsala parama dayaLa
c. bhaja rE bhadrAchalam-mAnasa

4. In this Sri Madhurageetham, ___________, Sri Swamiji beautifully describes how Lord Rama along with Lakshmana and Sage Vishwamithra came to Mithila to break the divine bow and got married to Sita Mata.
a. gambhIra naDaiyODu vandAn-rAman
b. poRumaiyum karuNaiyum thavamum sErndu
c. jaya jaya rAma kathE lOke

5. Sri Swamiji in this Sri Madhurageetham ____________ praises Lord Rama, the one who never differentiates anyone by their qualities or their limitations, removes all the fears of rebirth, bestow liberation, provides protection and finally says that Lord Rama is indeed the possessor of this divine name that is so easy to chant!
a. Ehi Ehi Raghuveera
b. Kazhugukkum kaDan seyda
c. dasharatha bAlakam dharmasvarUpam

7. Sri Swamiji in this Sri Madhurageetham, ‘Jaya Jaya Sri Rama Padhuke’ extols how the rays from Lord Rama’s Padukas led the way of life for each individual in Ayodhya. The Padukas laid the code of conduct as to how dharma should be followed and protected. Which verse in this Sri Madhurageetham refers to the above meaning?
a. Jaya jaya tratnasimhAsanarAjithe
b. Jaya jaya dharmashAsanachaturE
c. Jaya jaya kAmithavarapradE

8. Name the Sri Madhurageetham composed by Sri Swamiji which has the following line as one of its verses-‘pitrivAkya pAlana utthama putra’
a. vIra rAghavO vijayathE
b. bhaja rE bhadrAchalam
c. dasharatha bAlakam dharmasvarUpam

10. In this kirtan, Sri Swamiji calls out to Lord Rama to come quickly without any delay to protect him. In the previous verse, he says the moment one calls out the divine name ‘Rama’, his eyes swell with tears and he develops goose bumps.
a. urugAda uLamum or uLamO
b. Ehi Ehi raghuvIrA-mAm
c. thyAgarAja rAma sakhyapriya rAma