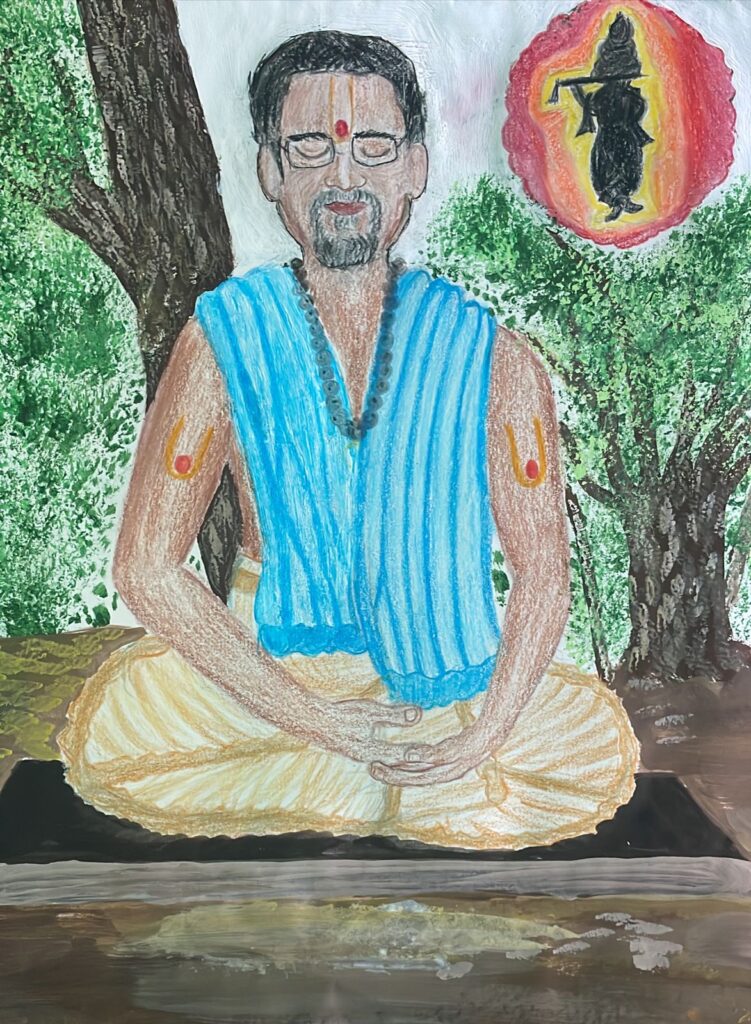 The entire gamut of bhakti has been expressed as a beautiful vast ocean in Sri Madhurageethams. There are five main bhakti bhavas in Bhakti Shastra and Sri Madhurageethams can be categorized under each of these five bhavas. This month we shall journey one such Madhurageetham which is an outpouring of Shanta Bhakti and also enjoy the rasa of sweet silence that this Madhurageetham reveals.

Our ‘question to relish’ (quelish) is –  Which Sri Madhurageetham shows Bhagavan Sri Krishna a perfect resting place for Him and Sri Swamiji assures him that he would not reveal His place to anyone as “he can’t!” and why is that he can’t?

“One, whose mind always rests in silence, is truly a Jnani.”, says Bhagavan Sri Ramana Maharshi.  When the mind is agitated it is ‘avidya’, when the mind is silent, attentive and filled with divine love, it  is ‘vidya’ and ‘vidya’ is ‘jnanam’.

Sri Swamiji, in a beautiful Madhurageetham, “solla solla paRakkudaDA – nam pAvam ellAm – hari nAmam” which glorifies the greatness of singing the divine names elaborates on this sweet silence. He says, “The mind which keeps moving hither and thither slowly on its own accord is silenced when chanted (thuLLat thuLLa ADiDum manam thAnE thAnE aDangudaDA)”.  The mind thus abides in silence – in its own source, in Sri Krishna Charanam and envelopes one in never-ending waves of bliss (aLLa aLLak kuRaiyAda Anandam thAnE perugudaDA).

So, when the mind is united with Krishna it blissfully drowns in dynamic silence.  Our Sri Swamiji in the Madhurageetham, “Angum Ingum OdAthey Kanna” also, highlights this silence in the last line of the song. He is inviting Bhagavan Sri Krishna to come to Him and unite with his mind (pAngAgavE en pangil vandiDuvAy en manadil sangamitthiDuvAyE).  So this results in a state which transcends speech and thought.  Hence Sri Swamiji says, there is no risk of revealing Bhagavan (solliDuvEn enDra bhayam vENDAm) thus answering the question of the quelish as to why Sri Swamiji cannot and will not reveal Bhagavan Sri Krishna!

This kirtan exudes the fragrance of Shanta Bhakti. The paths of Jnana and Shanta Bhakti, while very similar, are yet noticeably different. The end result of both paths is the realization of Bhagavan Sri Krishna as the Inner Self.  The path of Shanta Bhakti, in addition, is decorated with various bhavas.

In Srimad Bhagavatam, the Gopis, the very epitome of prema bhakti, in their Gopika Geetham extoll the Lord also as the indwelling witness in the hearts of all embodied souls (“akhila dEhinAm anthar Athma dhrukh”). Many spiritual giants and saints of India have been both great jnanis and rasikas. Their works have been renowned treatises that encompass and embrace both these grand paths.  Sri Jayadevar’s Geetha Govindam gives the highest Vedanta as expounded by the Upanishads interwoven and embellished with supreme rasa. The 22nd octet of Geetha Govindam (which we call as the kalyana ashtapathi) starting with “harim eka-rasam chiram abhilashita-vilAsam” is considered the crown jewel of all. This octet talks about that universal truth, that Brahmam as Bhagavan Sri Krishna sitting and gracefully sporting in the dense groves of Brindavan.  Sri Madhusoodhana Saraswathi a great scholar par excellence and a master in Advaita Shastra, in one of his lovely nectarine works states, “KrishnAtparam kimapi tatvam aham na jAne” – “I do not know of a truth higher than Bhagavan Sri Krishna, whose hand is adorned with the flute, who wears the yellow silk garment, whose lips are bright red as the bimba fruit, whose countenance is attractive, shimmering like the full moon and whose eyes are like that of the lotus.”   The great Avatharapurusha Sri Adi Shankara Bhagavathpada, proponent of  the Advaitha philosophy, in His Govindashtakam says, “that, ‘sathyam jnAnam anantham brahmam’ is verily Bhagavan Sri Gopalan.”

Our Sri Swamiji too in this kirtan,‘AnguM lngum OdAmal’, very lucidly portrays this highest state of oneness and the supreme rasa both on the same plane. The last line of this kirtan perfectly fits this quelish where in Sri Swamiji pacifies Bhagavan Sri Krishna that he would not reveal His presence to anyone and hence, He need not fear (sollaRa nilaiyenakku varumAdalAl  solliDuvEn enDra bhayam vENDAm) as this-is, a silence-state ever!

Another lovey Sri Madhurageetham, “Acchiyar pOtrum AnaikkuttiyE…” (which is sung during dolotsavam) also conveys the same bhava where Sri Swamiji ends the song by singing lullaby to Bhagavan calling Him to come and rest in his heart!(ULathil vandiduvAy thAlElO).

Let us now enjoy the lyrics and meaning of this Sri Madhurageetham ‘Angum lngum OdAmal’ set in Raga Sama and Adi Tala.

Not  running  hither and thither,
not putting on a song-and-dance,
not wandering into dimming  dusk ,
Not going into deluging Yamuna water(s)
there is a place for your rest
there, none will ever know
Come near me, with gait so fine
Be united with the mind Of mine.

‘cos of you I shall be blissful
‘cos of me you shall be restful
Krishna, please do your math,
The gains are much for you
to the naysayers, Listen not!
Come on in, nice and quiet (without announcing to anyone)
As me in an ineffable state
Fear not I will reveal

Click here to go back to the March 2022 newsletter page:
https://godivinity.org/newsletters/nama-dwaar-newsletter-march-2022/