A Namadwaar has been functioning, for the past several years, at Ambasamudram near Tirunelveli [S.India]. Mr. Ramanan is in charge of this Namadwaar. Due to his untiring labor, several centers have come up around Ambai [Ambasamudram] and the Divine Name has spread remarkably. 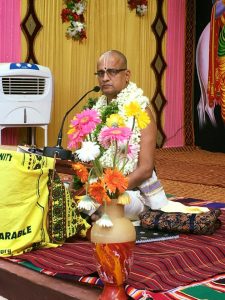 In this place lives the devotee, Mr. Kumar. He has spent a huge sum in establishing a Center for Sri Aurobindo and the Mother. He desired to install a small Ganesha murti there and had prayed to Sri Swamiji to bless the installation ceremony. He also desired to conduct a Srimad Bhagavata Saptaham on this occasion.

Srimad Bhagavata Saptaham was conducted from 13th to 19th March. The reading of the Holy Text [Moola parayanam] was done at the Center built by Mr. Kumar. Evening discourse was conducted in Tilakar School campus at Kallidaikurichi. All at Tilakar School – the Correspondent, the Principal, the Vice-principal and Teachers – showered their affection on Sri Swamiji. On day one of the discourse, there was an audience of about a thousand. It increased day by day and on the last day, there were three thousand. Rain on the last day forced the discourse to be cut short.

Sri Swamiji stayed the whole week in Mr. Kumar and his sister Ms. Valli’s house at Ambasamudram. A special mention has to be made about Mr. Kumar and his sister Valli. During his earlier visit to their house, Sri Swamiji had sat on the swing in their house. From then onwards nobody sits on that swing! At the close of the day when Sri Swamiji went to bed, Mr. Kumar would play the veena. In the morning, too, he would play the veena to wake up Sri Swamijji! He himself would wake up early in the morning and spend an hour in decorating the swing with flowers. He would not permit anyone to use the room used by Sri Swamiji. He has carefully preserved all articles used by Sri Swamiji. On every Swati star day, he conducts worship to that swing! Both the brother and sister chose to remain unmarried. The two live in that house.

One day Sri Swamiji visited Namadwaar. At Namadwaar Mr. Ramanan and his wife worshiped the holy feet of Sri Swamiji. The devotee Mr. Shankar Mani has donated a place to facilitate the functioning of Namadwaar in its own place. Radha Kalyanam was conducted on both Saturday and Sunday. Bhagavatas and children from Ambai and Kallidaikurichi did Divyanama pradakshina [circumambulation chanting the Divine Name] so beautifully. It was wonderful to see the little ones dressed up as gods. After the discourse, Sri Swamijji spent the night at Virudunagar Namadwaar. In the morning around 7 a.m., thousands of devotees assembled at Virudunagar Namadwaar.

On the 20th March, Sri Swamiji visited the place of devotee Lakshmikantan to attend Bhoomi puja [worship of Mother Earth at the start of construction of a building] for the construction of Namadwaar. Devotee Kantheesan along with thirty other devotees had levelled the ground and built a pandal and stage overnight for seating Sri Swamiji. It was simply wonderful! After the Bhoomipuja Sri Swamiji spoke briefly about the need for Namadwaar and its objective.

May Nama spread all over the world and bestow all auspiciousness.

Translated into English for Madhuramurali magazine English edition, May 2017 issue