The Story behind Onam

In the earlier ages, there was an asura king called Mahabali.  His kingdom covered Heaven, Earth, and the Underworld.  Although he was an asura, he had a reputation for being benevolent and very helpful to his subjects, unlike his relatives.  Although he was a very good king, he still had some enemies. The Devas, who were the previous owners of Heaven, were scared that they would never get their kingdom back. Since Mahabali was much stronger than them in battle, the Devas had no way out.  Aditi, the mother of the Devas, went to Lord Vishnu and prayed to Him for restoration of their kingdom. Vishnu replied, “I shall grant you your wish. I will come down and restore the kingdom to your sons.” The Devas patiently waited for the Lord to come down. 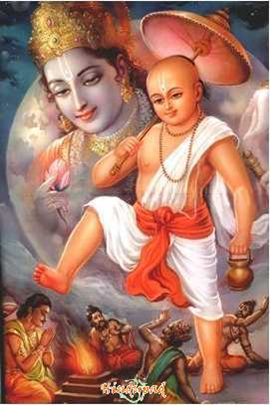 After a few hundred Earth years (which equals one day in Heaven) passed, the Lord decided to come down as a child to Aditi and Kashyapa, the Devas’ parents. Aditi named the child Vamana. Vamana grew up very quickly and became a very learned brahman.  He then thought, “It is time I fulfilled the Devas’ wish. Let me go to Mahabali.” Thinking this, Vamana walked to Mahabali’s capital. At the capital, Mahabali was holding a big yajna that would make him stronger than anyone in the three worlds. All brahmanas were invited for receiving dakshina from Mahabali. Even if one brahmana did not get the dakshina they wanted, the yajna would not be complete. So, when Vamana arrived, Mahabali had given all the brahmanas their dakshina. He was about to do the last rites for the yajna when he saw Vamana. He addressed Him, “O Great Revered One, you have come at the correct time. Please ask me what you want. I can give you anything.” Vamana could see that Mahabali had ego in him and wanted to get rid of that. So, he replied, “If you can give me anything, then grant me all the land that my next 3 steps will cover.” Before Mahabali agreed, his guru, Shukracharya, warned him, “Mahabali, do not offer this brahman what he wants. I sense he will bring your downfall.”

Mahabali replied, “O revered guru, the brahmana may bring my downfall, but I cannot refuse him.  Please let me grant him his wish.” This angered Shukracharya. He cursed Mahabali that he will lose everything. Instead of listening to his guru’s wise words, he disobeyed them and agreed to Vamana’s request. When Vamana heard this, he started growing and growing until he was bigger than the universe. Then, with one step, he covered the Earth, and with his second step, he covered the heaven. Since he had covered Mahabali’s kingdom with two steps, he asked him, “O great king, where should I keep my third step?”  Realizing it was the Lord who had come down to destroy his ego, he replied, “O great Lord, keep your third step on my head.”  Vamana, pleased that Mahabali was humbled, said, “I am pleased with you. You shall have your own kingdom in the underground but luscious Sutala region. I also grant you a boon. What do you want?”

“O Lord, I want to come down to my kingdom every year to see how it is prospering.”  So, every year on Onam, Mahabali comes down to see his kingdom  and his subjects. This year it falls on August 29.