The Unalloyed Devotion of Prahlada

In the seventh canto of Srimad Bhagavatam, in answer to King Parikshith’s question requesting Sri Shuka to dispel his doubt whether Lord Narayana was partial (to the Devas) or impartial, Sri Shuka says: “… yad bhAgavata mAhAtmyaḿ bhagavad bhakti vardhanam…”
(The stories of great devotee [referring to Prahlada here] is a means of increasing devotion to the Lord).
Praising Parikshith for having asked a question that reminded him of a great devotee, Sri Shuka goes on to say that the story of bhagavatas (like Prahlada) are extolled with great joy by rishis themselves, headed by Sage Narada. And indeed, Sri Shuka narrates the story of Prahlada in Srimad Bhagavatam through the words of none other than 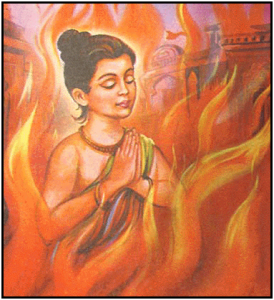 Prahlada’s Guru, Narada, who was overjoyed to praise his disciple, because Prahlada had no parallel.
A person whose birth, learning, power, beauty and wealth serve only to fuel his pride, cannot approach you sincerely O Lord, says Kunti Devi in her song of praise to Bhagavan (Kunti Stuti, SB 1:8). Prahlada, who was endowed with all of these – birth, power, learning, beauty and wealth – did not allow any of these to come in his way of attaining the Lord. He did not view the world as full of men; all he saw was Narayana.
Unlike children of his age who played with toys, he was constantly absorbed in the Lord. His mind was always overwhelmed with the thoughts of the Lord, his eyes brimmed with tears of joy, and his lips constantly sang His Name and praises.
Once Hiranyakashipu asked his son, “What is the highest good?” Prahlada’s fearlessly replied, “Leaving the false idea of ‘I’ and ‘mine’, one should leave one’s home which is no different from an unending well, go to the woods and seek refuge in Sri Hari!”
Prahlada’s intense devotion to the Lord had effortlessly earned him Knowledge and dispassion. Could reprimands, intimidations or threats change the heart of a devotee? Hiranyakashipu tried to get the answer he wished to hear, a second time, but in vain! When asked again by his father about something excellent he had learned from his guru, Prahlada answered beautifully:
“shravanam, kIrtanam, vishnOh smaraNam, pAdasevanam, archanam, vandanam, dAsyam, sakhyam, Atmanivedanam, iti pumsa arpita vishno bhakthischa nava lakshana”
(Hearing the Lord’s stories, singing His praises, remembering Lord Vishnu, service to His Feet, offering worship and prayers to Him, serving Him as a servant, looking upon Him as a friend and to completely surrender one’s soul to Him, are the nine ways by which bhakti should be performed unto the Supreme Lord; this is my highest learning.”
It is quite natural for a father to admonish a wayward son, but who would persecute one’s son as an enemy? Hiranyakashipu did. He used demons, elephants, serpents, hurled him from cliffs, administered poison, starved him, exposed him to fire, frost, winds, and floods and crushed him under rocks to dispose of him. But Prahlada, who had the Lord’s Name constantly on his lips was ever protected by the Name itself; the demon king who had conquered the three worlds could not touch a hair on his son’s body!
Sent back to school in frustration by his father, Prahlada imparted the Name of God to the other asura boys, his classmates, when his teachers were away. He asked them to take refuge in Lord Narayana who is the Supreme Truth sought even by great souls who have given up attachment to everything. He convinced the boys to give up their demoniac disposition and practice pure love and compassion to all, which can be easily attained by bathing in the dust of the feet of holy men. He revealed to these young boys what he had hidden from his own father: that pure devotion to the Lord was graced on him by his Guru, Narada, when he was still in the womb of his mother.
Prahlada’s efforts to influence the other asura boys was the last straw for Hiranyakashipu! Hiranyakashipu challenged Prahlada to prove the Lord’s presence in everything. Prahlada calmly reiterated that he saw none but Hari everywhere! As Hiranyakashipu struck a pillar to which Prahlada had bowed a moment before, in obeisance to the presence of Lord Sri Hari, Lord Nrsimha emerged from the pillar with a loud roar, to prove the words of His devotee true!
The Lord did so to protect his devotee, the five year old asura son of Hiranyakashipu. It did not matter that Prahlada was the son of a demon; all that mattered was the pure love he had for the Lord. Though the Lord remains detached from everything, He cannot help but rush to where His devotee is and He most delightfully let’s Himself get bound by the cords of pure love and devotion.
Such is the love Lord had for Prahalada, He rushed to protect His blemishless devotee, His dearest one, the most exalted bhagvatha whose name alone is placed before his Guru in the list of great devotees –
Prahlada, Narada, Parasara, Pundareeka,
Vyasa, Ambareesha, Shuka, Sounaka Bheeshma, Rukmangada, Arjuna, Vasishta, Vibheeshana!
Lekshmi Nair, Houston TX