The Lord’s divine Name, or Nama is just as powerful as Him. In Kali Yuga, Nama sankirtanam is the simplest and best way to attain the Lord. Chaitanya Deva, also known as Mahaprabhu, was an avatar who exemplified the yuga dharma by always chanting nama. He traveled throughout India and spread love and nama wherever he went. We’ll now read about one of Mahaprabhu’s leelas during his travels.

He was then staying in a place called Kurmakshetra. Around the same time period, there lived a rich but devoted man who was afflicted with leprosy. He started leading a reclusive life because he realized that his own family and friends would soon put him in quarantine. Due to his condition, his body started emitting an abominable stench. As time passed, worms and maggots started feeding off of his sores. But when the worms fell down, he picked them up and put them back on his sores. He was so compassionate and caring that he didn’t want those creatures to starve. He lived in a dilapidated house and spent his entire day chanting Vasudeva’s nama. Nobody saw him or knew his name. People only heard him chant ‘Vasudeva’ repeatedly. Hence, he was known by that name. Vasudeva survived only with the leftover food that people gave him as alms. 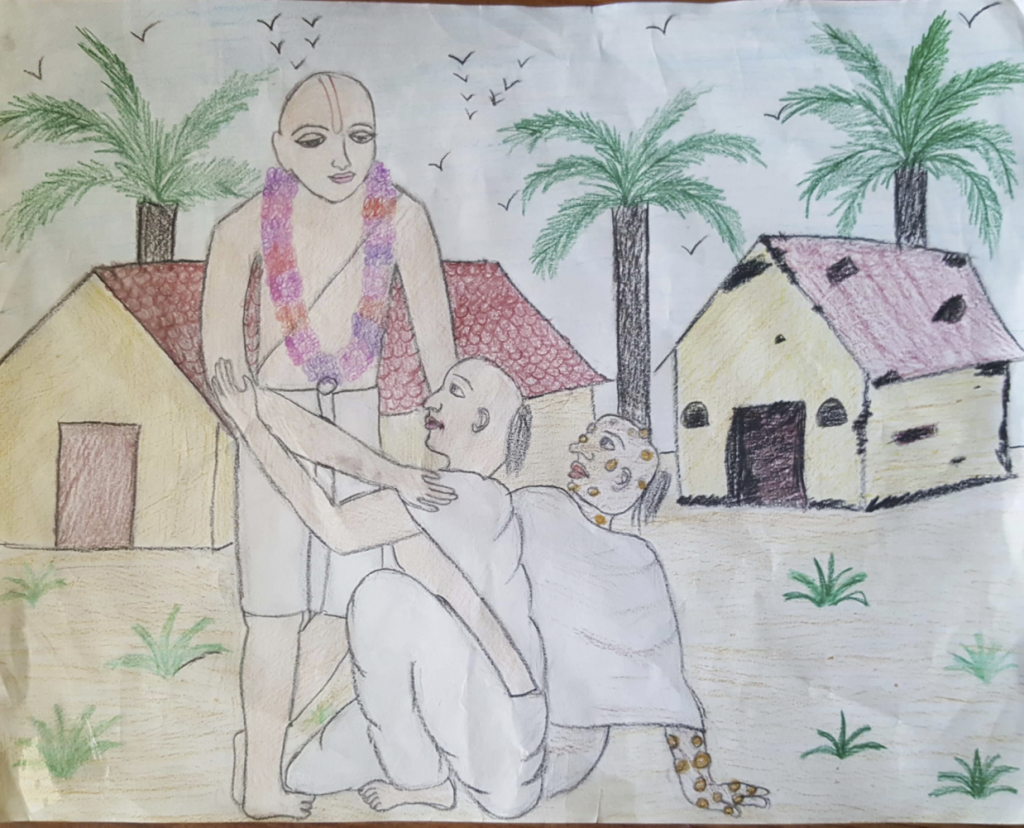 One day, during his ritual bath, he heard that Chaitanya Mahaprabhu was leaving Kurmakshetra. Vasudeva was really disappointed since he couldn’t get Mahaprabhu’s darshan. But continued to chant nama. As all of Mahaprabhu’s devotees gathered and were bidding a tearful farewell to him, he suddenly turned back. This intrigued his devotees. Many of them assumed that he came back for Kurma Bhagavan, but to their surprise, Mahaprabhu stopped outside Vasudeva’s old hut and called him. Vasudeva was very hesitant to come out at first due to his current state, but upon Chaitanya Deva’s insistence, he ran out and fell at his feet. Then, Chaitanya Deva lifted the leper in his arms, embraced him, and lo! his leprosy was cured and Vasudeva’s body became as radiant as Chaitanya Deva’s. Vasudeva was amazed, and cried tears of joy because of Mahaprabhu’s compassion!

His constant chanting of Nama drew Mahaprabhu towards him and cured him. All of the people who witnessed this incident realized the power of chanting the divine name.

Friends, let us all continue chanting Nama and reap all the benefits!