One day, Emperor Akbar and his minister Birbal, with a few soldiers, went on a visit to a nearby province. On the way, as they galloped on their horses, Akbar noticed Birbal moving his lips constantly. When asked, Birbal said that it was the divine name “Rama” that he was constantly repeating, which he had inherited from his parents. Emperor Akbar was impressed and was proud of his minister. 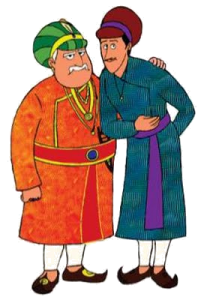 A little later they realized that they were separated from the soldiers and had lost their way in the woods. Both of them were really exhausted and hungry. Akbar wanted Birbal to accompany him in search of food. But Birbal settled down under a tree with his japa mala and requested Akbar to excuse him for a hour to do his Rama nama japa.

Akbar was surprised and annoyed. He said, “Will this Rama nama bring you food? We need to put some effort and not just sit under a tree and chant.” Birbal quietly continued his japa. The angry king stomped away by himself in search for food.

After walking a while Akbar found a small hut in a clearing. The moment the occupants knew that it was the Emperor himself, they welcomed him with all respect and fed him well. The king offered them a few gold coins as a token of appreciation. Before he took leave, he also had some food packed for Birbal.

Akbar then triumphantly went back to the place where Birbal was chanting Rama nama. After finishing his japa, Birbal happily greeted the king and asked if he had been able to find anything to eat. The king nodded proudly and handed Birbal the food that he had brought, saying sarcastically, “Only effort has brought this food. This was not fetched by Birbal who sat here chanting Nama.”

Birbal did not utter a word, but ate the food with tearful eyes. Once Birbal finished his dinner, he turned to Akbar and said in a choked voice, “Only today have I directly experienced the power of Rama Nama! Though you are a great emperor, you had to beg for food today. But do you know what this Rama Nama has done for me, who did nothing but simply chant it? Rama Nama has made the king beg and bring food for me, a poor nobody! I have been blessed with food although I was only simply sitting here under the tree. This is verily the glory of Rama Nama!”

Children, now do you realize that anything is possible by chanting the Divine Name of God?