Gopa Kuteeram kids around the US are being taught stories from Srimad Bhagavatam, Srimad Ramayanam, and Bhakta Charitrams as part of their regular classes and are encouraged to write what they learned.

The following article is from Ardenwood, CA Gopa Kuteeram center, on the story of Jada Bharatha from Srimad Bhagavatham. 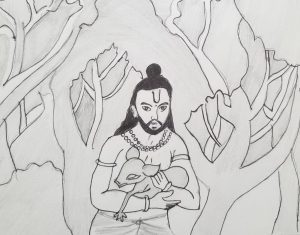 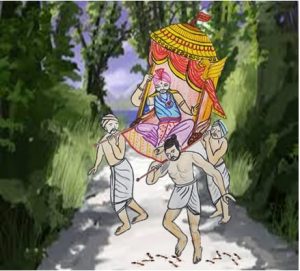 There was a king called king Bharatha. When king Bharatha became old he gave his kingdom to his sons and went to the forest to meditate there. He only wore deerskin but not anything else. His hair grew big like a lion’s mane. His hair became matted. He took bath three times a day. So if anyone saw him he would always look wet. He took roots that were edible and fruits. He offered the food first to Krishna then ate the prasadam. Most of the time he meditated on the Supreme Lord and soon he was super happy that he got tears of happiness.

One day he heard the roar of a lion. Then he saw a pregnant doe who was about to give birth when it was drinking water. Then, the doe heard the lion’s roar. She tried to run to save her life but then she gave birth to the fawn, but the doe was not able to bear the pain so the mother doe died. Bharatha took pity on the fawn, so Bharatha raised the fawn with lots of affection. Bharatha was so attached to the fawn, but since he spent too much time with the deer he didn’t spend much time meditating. When Bharatha was about to die he thought about what would happen to the deer.  He thought of the deer, at a time when he was actually supposed to think of Krishna. Since he thought of the deer instead of Krishna in his next birth he actually became a deer. Bharatha knew he made a mistake. In his second birth as a deer, he died again and turned into a human in his third birth.

Now in his third birth, Bharatha dedicated his whole life to meditating on God. He would not talk a lot and mostly he would talk to himself. People thought he was weird so they called him Jada Bharatha.

A few people were searching for a good human to offer as a sacrifice to Goddess Kali. So they found Jada Bharatha. He remained calm throughout, even when they started the ritual and tried to slaughter him. But Goddess Kali got wild because they were going to kill a great mahatma, so Goddess Kali chased the people away.