Chaitanya Mahaprabhu was born to Sachi  Devi and Jagannath Mishra  on February 18, 1486 in a town called Navadweep. He used to be fondly known as Nimai. He had an elder brother by the name of Viswarupa. Even when Nimai was a child, Sachi ma used to say “Hari bol” (Chant “Hari”) to  console him whenever he cried.  This shows the attraction that young Nimai had for the Lord’s name. 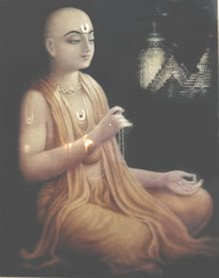 By the age of 12, Nimai had mastered all scriptures and was a renowned scholar in Navadweep. He was well versed in grammar and literature and nobody could win him in debate or literary discussion. He started a school after his father’s demise. At his mother’s insistence he married Lakshmi Devi and later, when she passed away, he married VishnuPriya.

Nimai met his Guru during a visit to Gaya, and a transformation came over him. He realized that everything in the world was contained in the Name of Krishna. He closed his school and gathered a few devotees in Navadweep and spent all his time and energy doing Nama Sankirtan (singing the divine names  of the Lord), and losing himself in bhakti. Nimai later took sanyasa (renounced the world) and was given the name of Sri Krishna Chaitanya (fondly called Chaitanya Mahaprabhu by his devotees).  He then traveled all over India on foot and spread the Divine Names of the Lord.

There is one incident in his life which shows clearly the purpose of his incarnation. When Mahaprabhu was doing Nama Sankirtan in Navadweep, some people could not tolerate it. So, they wrote to the Kazi (the officer-in-charge) falsely accusing Mahaprabhu. On receiving the complaint, the Kazi passed a rule forbidding Nama Sankirtan. Srivasa Pandit, one of the earliest devotees of Mahaprabhu, and in whose house their satsangs used to happen, was really worried. Meanwhile Mahaprabhu was reading the story of  Lord Narasimha, the avatar of Lord Vishnu who had emerged from a pillar to save his devotee Prahalad. On listening to this story, Mahaprabhu went to a state of trance and went to the house of Srivasa Pandit. Mahaprabhu let out a roar like Lord Narasimha and said, “Srivasa! How can you feel scared to perform Nama Kirtan? I have come to show the path of Nama Kirtan to the people of this Age. I shall request, beg, fall at each one’s feet; I shall even threaten and even beat them so that the Mahamantra comes out of every lip. Do not be afraid. Perform Nama Kirtan!”

Mahaprabhu then walked up to Srivasa’s grand daughter who was then a small baby and touched her saying, “Narayani! Chant the Nama!”  The six-month old baby which had not even learnt to talk, clapped her hands and chanted names of the Lord.

That very night the Kazi had a dream in which he experienced a lion attacking him. When he woke up with a fright, he found scratches on his chest as if a lion had indeed attacked him! He at once realized his mistake and lifted the ban on Nama Kirtan.

This incident clearly shows that Chaitanya Mahaprabhu incarnated on the earth to show the path of Hari Nama Sankirtan.