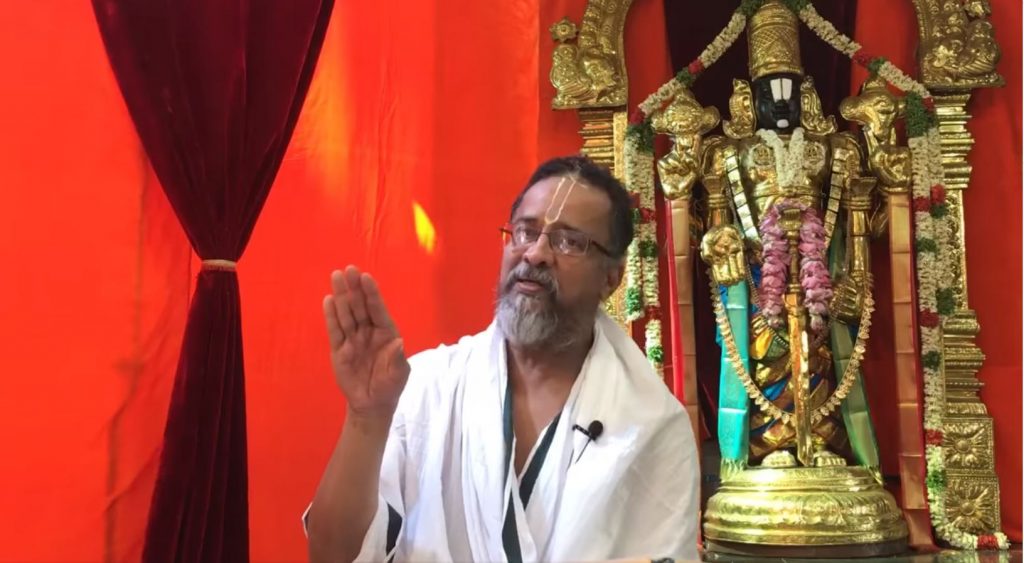 India, known as Bharat, is a land filled with mahatmas who dwell in the Supreme bliss. The term bhArat is derived from the word ‘bhArata:’. In Sanskrit, bhArata: means bhA rUpe brahmaNi ratA: iti bhAratam, those who dwell in brahman. And as the country is filled with bhArata:, India is also called as bhAratam.

That is why we see that in Srimad Bhagavatam, the name “Jada Bharata” is given to such a great jnani; jaDa (for his physical state, which was inert) and bhArata as he was a realized soul.

And to this great Sri Jada Bharata, King Rahugana asked, “How do I attain real knowledge?”

Would doing penance, or performing severe austerities, or fasting for days together or taking up sanyasa make one an enlightened person? None of these would do. Rather, by doing so, one may get an entry in the Guinness book of world records but never attain jnana. Then how can one attain jnana?

Sri Jada Bharata replied, “विना महत्पादरजोऽभिषेकम्”.. [One] cannot attain the Supreme knowledge without smearing the body with the dust of the Lord’s devotees.”

So without having the company of the truly enlightened person, one is sure to not attain the true knowledge. If we know someone who is a self-realized soul, then it is definitely indicative that the person has had the company of a true Mahatma.

True bhakti (devotion) or jnana (knowledge) or vairagya (dispassion) is absolutely impossible without the company of the real Mahatma.

When it is clear that one needs the company of the holy person, a Mahatma, to attain jnana, does that mean that one should go in search of a Mahatma? We are very close to our kith and kin, yet we are unable to understand them completely. On the other hand, these great Mahatmas are those devoid of ‘mind’. So how can one understand them? And before that, how can one even recognize them? After all, they also look like us and are in no way different in physical appearance. So, if one goes in search of such a jnani, one is sure to be fooled.

Then what should one do? Pray earnestly and Bhagavan will send an Uttama Guru. When in the company of the Guru, the grace of the Guru will bless one with jnana.

Now the question arises – how does one earn the grace of the Guru? Grace is not an action or a measurable quantity. One cannot ask a Guru to shower 1 kg or 1 liter grace on him. Grace is an emotion which is triggered on its own. In fact, the Guru himself cannot will it.

In Srimad Bhagavatam, in Canto 11, while talking about the 24 Gurus, there is a mention of a lady named Pingala who was a courtesan. Describing her life, it is said that one day she repented for her mistakes and thought, “Why am I living like this and wasting my life? I should make proper use of my life and have the darshan of Bhagavan.”

She realized that that very thought arose in her only because, out of the good deeds that she must have done in her past births, a random act had probably pleased Bhagavan and therefore made her the recipient of His Grace. Otherwise this thought to reform would not have come at all.

Likewise, when we serve our Guru or Bhagavan with the sole intention of pleasing Him, then one of the days, when the heart of our Guru/Bhagavan is touched, the grace will flow! And this grace will lead to “true” jnana, bhakti and vairagyam, making one attain the real purpose of this human birth.