The story of Akrura’s darshan started off when Kamsa, Krishna’s uncle, ordered Akrura to bring Krishna and Balarama to Mathura, so that he could kill them. Akrura immediately followed Kamsa’s orders, and traveled to their home village by chariot. After packing their things and saying goodbye to their family, Balarama and Krishna boarded Akrura’s chariot, and the three left for Mathura. 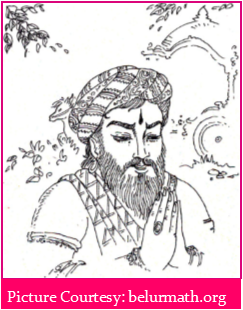 The chariot was very fast and soon they had reached the banks of the Yamuna river. Krishna and Balarama went into the holy water to perform their morning rites. Akrura watched them from the chariot as they finished their prayers and returned to the chariot. He himself then went into the river to bathe and perform his own rituals. After chanting the sacred mantra, he dove into the water, and saw a strange sight. When he opened his eyes underwater he saw Krishna and Balarama. Akrura was very confused however because he didn’t know how Krishna and Balarama had come back into the water so quickly. He immediately went back to the surface and saw that Krishna and Balarama were near the chariot talking happily. Convinced he was hallucinating, Akrura dove back into the water, but when he opened his eyes, he once again saw an odd sight. This time he saw Adisesha the thousand-headed serpent and Narayana reclining on him, with the seven rishis and devas surrounding and adoring the both of them. After seeing this Akrura realized the only reason he had been blessed with such a holy vision was because he was in the presence of the earthly forms of Adisesha and Narayana – Krishna and Balarama. He knew that Krishna and Balarama must have only come from heaven to save Mother Earth from evil. Soon his vision of Narayana and Adisesha disappeared, and he left the river in a very puzzled, but happy state.

When Akrura returned to the chariot, Krishna saw his delighted expression, he asked Akrura with a mischievous smile, “Akrura did you see anything wonderful? Tell us what you saw?” Akrura replied, “Oh yes indeed! I saw an amazing vision today where I saw Narayana and all other holy beings at once. It showed me that Narayana himself must be on Earth in the form of a human, undergoing the same cycle of pain as all beings. It must be you Krishna!” Krishna merely smile in reply, and with a heart full of joy Akrura took the reins, and drove the chariot quickly to Mathura. As they entered the city, the citizens could not take their eyes off the beautiful  Krishna and Balarama, and instantly fell in love with their beauty. They told Akrura to go tell Kamsa that he had brought the boys into the city. Akrura was then overcome by sadness and said, “Oh Krishna do not abandon me now. Now that I have come so close to you, please let me take you and Balarama to my house to wash your feet and feed you. I’m not even worthy to live on this Earth if I cannot care for the Lord.” Krishna smiled and said, “Akrura do not worry. I have always been fond of my bhaktas. And your vision proves that your heart is pure. Let me go care for my people. It is not right of you to neglect your duty to Kamsa. Go and tell him of your success. I will see you soon.”

With a heavy heart, Akrura left Krishna. And Krishna left with Balarama and other Gopas to explore the city.