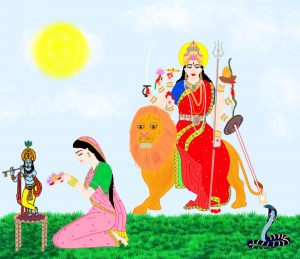 Sri Swamiji, who is ever soaked in Srimad Bhagavatam, celebrates Sri Krishna’s sister, ‘Sarasijanabha sodhari’, in this lovely kirtan that is completely in line with Srimad Bhagavata Mahapurana. Srimad Bhagavatam shows that Durga Devi is the Yogamaya of Bhagavan Sri Krishna. Bhagavan does an ashtottram for His own Yogamaya in Bhagavatam, with 14 different names – Durga, Bhadrakaali, Vijaya, Vaishnavi, Kumudha, Chandika, Krishnaa, Madhavi, Kanya, Maya, Narayani, Ishaani, Sharada, and Ambika.

Durga Devi is praised in various aspects in Devi Mahatmyam, Lalitha Sahasranamam, slokas of Adi Shankara Bhagavat Pada, and many more. Our Sri Swamiji brings out the greatness of Durga Devi, by also bringing out the essence of these stotrams on Her and rendering it in simple and beautiful language in a truly unique composition on Durga Devi.

Being the first name uttered by Bhagavan, of all the fourteen names, Sri Swamiji begins his Sri Madhurageetham with the name ‘Durga’. He says Durga will be the protector for all human beings, creatures, the entire universe always and at all places. Why does he use the phrase ‘Engum Eppozhudum’? There is a sloka in Devi Mahatmyam (sarvOpakAra karaNAya sadA Ardra chitta) where it says that Durga Devi’s heart is always pining to get a chance to protect Her devotees. Hence the word ‘eppozhudum’ (always). Indeed, every word of a mahatma is rooted in the foundation of our shastras! And for ‘engum’ the pramANA is in Sri Adi Shankara Bhagavadpada’s Mahishasura Mardhini stotram, where he addresses Her as tribhuvanaposhiNi. She is the one who nourishes all the three worlds. Hence ‘engum’ (everywhere). Wherever and whenever we are in trouble, She is ready to help, with Her abhaya hastam and the weapons She holds.

Further, Sri Swamiji wonderfully reveals different aspects of Durga Devi’s role in Lord Krishna’s and His devotees’ lives. He praises Devi and the rendition continues as,

Srimad Bhagavatam says that Bhagavan commanded His yogamaya to do His kainkarya. And Sri Swamiji also uses the same tone here – kaTTalai (command). Immediately, She said ‘Yes’, circumambulated Bhagavan and carried out His command by transferring Balarama from Devaki’s womb to that of Rohini’s. Hence the term ‘shiramErkonDu’ implying that she performed the given kainkarya immediately, with love and respect. Here Durga Devi is portrayed as a sishya to Bhagavan Sri Krishna, in executing His instruction as a kainkarya or seva.

Bhagavatam then says Bhagavan told Yogamaya to be born to Yashoda Ma just like He was going to be born to Devaki Ma. ‘Anusaritthu’ means followed – she followed both Lord Krishna’s words by carrying out His command, as well as followed His action of actually being born. The very same moment that Bhagavan Sri Krishna was born in Mathura, Durga Devi’s avataram also happened in Gokula, through Yashoda’s womb. So Krishna Janmashtami day is also Durga Janmashtami. Here Durga Devi is portrayed as a sibling to Krishna.

Srimad Bhagavatam tells of how all the little Gopis of Vrindavan took a sankalpam that they would fast for 30 days and pray to Kathyayani Devi to attain Sri Krishna’s seva.  Sri Swamiji sings that ‘akkaName’ – that very moment (even before they performed the actual vratha) – Kathyayani Devi gave the fruit of their prayer as Krishna came there right away. As they were praying loudly to Kathyayani Devi, Krishna showed up there, possessive as He is of His devotees, and because He was sent as a guard for the little girls as they went to the Yamuna for their vratha. Here Durga Devi is portrayed as a bestower of boons to Krishna’s devotees.

Rukmini wished to marry Krishna. She prayed to Durga Devi with numerous articles of worship, to remove the obstacles to marry Krishna. She also expressed her prayer, thinking that, as Durga is married and has children, she can understand her prayer to get married to her loved One. And also Durga Devi’s son is Ganesha, the one who can both create and destroy obstacles. So when Rukmini prayed thus, Durga Devi ordained Her son to create obstacles for the enemies, like Shishupala, and remove obstacles in Rukmini’s path to attain Sri Krishna that very day. Here Durga Devi is portrayed as one who removes obstacles for Krishna’s devotees.

In this charanam, Sri Swamiji presents the gentle side of Shakti. The fine arts – singing, dancing, art, etc. – and an aesthetic sense are adornments to Krishna bhakti. So Sri Swamiji sings that Durga Devi blesses and enhances the artistic ability of Krishna’s devotees, because we can truly experience the depths of bhakti bhava through fine arts. Here Durga Devi is portrayed as a teacher/guru to Krishna’s devotees.

In the pallavi, Sri Swamiji says  ‘Durga thuNai iruppAL namakku’, meaning Durga shall protect ‘us’. Who this ‘us’ is, is explained in this last charanam.

The pramANA for this is again in Devi Mahatmyam. The key sloka of Devi Mahatmyam that speaks of Durga Devi destroying our problems goes ‘durgE smritA harasi bheetim asEsha jantOho…’. The normal meaning of asEsha jantoho is that all living beings’ problems will be solved by Durga Devi. Sri Swamiji here gives a lovely, new twist to this famous sloka. He sings Krishna’s devotees are also taken care of by Durga Devi. So re-interpreting the word asEsha – sEsha also means one who is beholden (servant), and the syllable ‘a’ denotes ‘Bhagavan’, as Sri Krishna Himself tells Arjuna in Bhagavad Gita (aksharANAm akArosmi – among the syllables, I am ‘a’). Hence asEsha jantoho also means those who are the servants of Bhagavan Sri Krishna. So the namakku in the pallavi stands for ‘kaNNanin bhaktargal’ that is shown in the last stanza.

Durga Devi is indeed one who aids Krishna’s bhaktas in their path of Krishna bhakti.

Based on Sri Ramanujamji’s exposition of this Sri Madhurageetham in the Madhuram Aho Madhuram Series
Ieswarya A, Bengaluru, Chennai