King Prithu had a son named Vijithaashva. Vijithaashva had 2 sons Shikandi and Nabasvathi. Shikandi’s sons were Paavaka, Pavamaana, and Suchi (who were Agni devatas). Nabasvathi had a son named Havirdhana. One of Havirdhana’s sons was Barhishad. Barhishad was attracted more towards the karma kanda part of the Vedas and performed various sacrifices (yagas and yagnas). He did many kinds of yagas and yagnas in different places, and this caused the whole earth to be filled with east-facing darbha grass. Because of this, he came to be known as Prachinabarhis.

Prachinabarhis married Shatadhruti and they had 10 sons and they were all together called “Prachetas”. When all of the Prachetasas went to perform tapas, they had darshan of Lord Shiva. Lord Shiva gave them “Rudra Gitam”, in which Lord Shiva explained that Sriman Narayana is the ultimate goal to reach. Lord Shiva blessed them with this Rudra Gitam and asked them to chant this gitam and meditate upon Sriman Narayana. Prachetasas meditated for 10,000 years, chanting Sri Rudra Gitam and finally had the darshan of Lord Narayana. 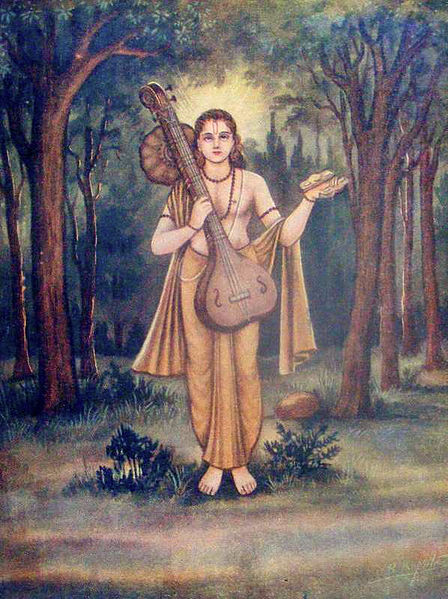 In the meantime, Prachinabarhis got more and more entangled in karmas that focused more on merit (punya) and worldly attainments than on attaining Bhagavan. Sage Narada decided to give him the upadesam of that jnana (knowledge) that will give eternal peace and Mukti (Liberation). Narada started to explain the allegorical story of Puranjana to Prachinabarhis:

There once was a king named Puranjana. He had a friend named Avignatha. He wanted to find a good, beautiful place that he could make his home. After looking around for a very long time, he found a place on southern side of Himalayas. The place had 9 entrances and the city looked very rich and beautiful. There he saw a very beautiful girl and she had 10 servants. A five headed snake was guarding that girl. That girl was looking for a groom. Puranjana expressed his interest to marry the girl and the girl agreed. They got married and lived as rulers of that kingdom.

Puranjana was so infatuated by this girl, that he spent all his time doing whatever she liked to do. She did not let him leave her side. One day, Puranjana went to a forest for hunting and killed so many animals. He returned back home and went to see his wife. But she was very angry as he had gone hunting without telling her. He convinced and calmed her with sweet words. He frittered away his life like this.

A Gandharva king named Chandavega, along with his 360 army men, 180 white women and 180 black women came to that city and destroyed the richness of the city. The five-headed snake guarding the city tried to fight Chandavega. The snake fought for 100 years. Finally, the snake lost its strength, and all the riches and wealth were captured by enemies and Puranjana lost everything, even the relationships with his wife and children, who were indifferent to him. But since he had so much attachment to his wife, children, wealth, property, he felt extremely sad when everything got destroyed. Finally he died. Even during his last moments, he did not think about his good friend Avignatha.

In his next birth, he was born as a princess and was married to a pious king who practiced spiritual sadhana and attained Bhagavan. When she was about to give up her life at her husband’s funeral pyre, Avignatha came in disguise and reminder her (him) about their friendship. He explained about Paramatma and Jeevatma and gave him the Supreme knowledge of Bhagavan.

Prachinabarhis asked Narada to explain the true meaning of the story of Puranjana. Narada explained it to him. Puranjana was none other than the jeevatma (individual soul). Avignatha (jeevatma’s friend) is Bhagavan. The city with 9 entrances that Puranjana settled in, is the jeevatma finding a body according to his karma. Buddhi is the beautiful girl who married Puranjana. Its because of the presence of buddhi, a human thinks that wealth, property, spouse and children as his belongings and get attached. Pancha praana (life breath in five forms) is the 5 headed snake. This pancha praana guards the human body.

Chandavega who comes to destroy the human body is the Time that makes the body grow old. 360 army men are the days in a year. 180 white and black women are the days and nights that roll by with Time. Bhaya (fear) has Jara (old age) as its sister. A human is bonded due to his ignorance and goes through various miseries.

Narada further explained to Prachinabarhis how doing one karma after another is going to keep him tied to samsara. A jeevatma, who by nature, is effulgent with jnana, is clouded by ignorance (avidhya) and forgets its original nature. Only with steadfast devotion to Guru and Bhagavan, can we overcome these miseries. Only deep devotion towards Vasudeva can help us get true jnana and vairagya. This bhakti yoga is possible to get only by listening to Bhagavan’s leelas and stories.

After listening to Puranjana’s story, Prachinabarhis renounced all of his attachments. With a one-pointed focus, he prayed to Bhagavan’s lotus feet and finally attained His abode.