Given below are two true-life incidents that occurred in the lives of two devotees of Lord Guruvayurappan that were narrated by Sri Swamiji during the Guruvayur Sapthaha Sathakrathu Mahotsavam in 2008. 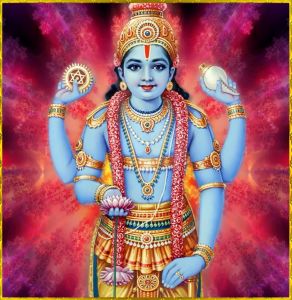 The thieves laughed at him and teased, “Oh! are these Guruvayurappan’s coconuts so special as to have grown horns?” When they tried to take the coconuts by force they all fell out of the bags. And, lo! what a surprise! the coconuts had indeed grown horns! A few such coconuts that had grown horns can even today be seen displayed inside the temple premises as an indication of the Lord’s divine play.

The next incident is as follows:

Once, a poor little boy could not get even a morsel of food to appease his hunger. Caught in severe pangs of hunger he stole a banana from a nearby fruit shop. Being a devotee of Lord Guruvayurappan he dropped half the banana into the ‘hundi’ while he ate the other half.

Learning about the theft the shop-keeper caught hold of the boy and demanded him to own up the theft. And the boy pleaded guilty.

Looking at the innocent face of the little boy the shop-keeper did not have the heart to punish him. However, with a view to teach the boy a lesson, he asked him to circumambulate (walk around) the temple a certain number of times. The shop-keeper was aghast to find Lord Guruvayurappan follow the little boy who went around the temple as instructed by him. Later, that night the Lord appeared in his dream and explained, “Since I have also had a share in the stolen banana I am bound to share the punishment, too. So I followed the boy around the temple.”

One Response to "Lilas of Lord Guruvayurappan"