There is a beautiful temple for Lord Varaha in Tiruvidanthai, a town which is about 38 km from Chennai. The Lord here has taken the form of boar and is found standing on Adi Sesha, holding the conch and the holy discus in his hands and embracing his consort Lakshmi Devi with his left hand. It is this posture of the Lord that gives the place its name (Tiru – Lakshmi, Idanthai – Left). 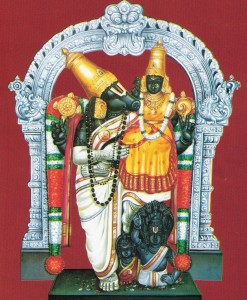 The temple itself was built during the Pallava period and is more than 1000 years old. Among the Azhwars, Tirumangai Azhwar has sung beautiful compositions on this Lord. Sri Swamiji too has sung a beautiful song on Lord Varaha of Tiruvidanthai set in Sindhubhairavi Raga. The lyrics and its meaning are presented here.

From a thumb-sized form, he transformed in a second (to)
A Yogic body with a captivating majestic form.
He killed Hiranyaksha and protected the Vedas (sruti)
He is the form of holy fire sacrifice, the Boar bearing Mother Earth