As we continue to explore Sri Swamiji’s compositions on various deities and kshetras, let us travel about 30 km west of Kumbakonam, to a small village known as Pullambhoothankudi.

The presiding deity here is “Valvil Ramar” (the bow-bearing Lord Rama). The uniqueness of this Rama is that here He is in a reclining posture, like the famous Lord Ranganatha of Srirangam. 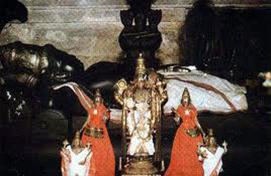 The purana of this kshetra is that it is here that Rama met the fatally wounded Jatayu, who had fought Ravana valiantly in his effort to save Sita. After conveying the news of Sita’s abduction to Rama, Jatayu breathed his last on His lap. Rama, who was unable to perform even his own father’s last rites, performed the last rites for Jatayu here. Since Jatayu lived and breathed his last in this place, this place got its name—pullam (bird) bhootham kudi (stays/lives). And Lord Rama is in the reclining posture because He is believed to be taking rest after performing the last rites of Jatayu. Another interesting point to be noted is that Lord Rama here is found without his consort Sita.

In Sri Swamiji’s beautiful song in Tamil on this “Valvil Ramar”, he starts the song by describing the Pullambhoothankudi Rama as one who enters and resides in the hearts of the pure and innocent. Then he goes on to praise that He is the Lord of both the learned as well as the illiterate. Finally he concludes by saying that the sole occupation of this Lord, who keeps his word, is to stand by His devotees who are suffering and to protect them always.

Meaning:
Pallavi
He enters the heart of the innocent,
Pullam Bhoothankudi Rama

Anupallavi
He is the bow-bearing Rama, who is praised by all
He is the Lord of both the scholarly and the illiterate

Charanam
He is the pure-hearted who is known to keep His word
Standing by the side of people who are suffering,
His sole occupation is to protect them like a mountain
This job Janaki Rama does tirelessly!