This month, in our Bharata Pradakshina, we have reached the westernmost tip of India to the city of Dwaraka. We all know that Lord Krishna established a kingdom in the ancient city of Dwaraka and ruled it for several years. It is believed that Vishwakarma, the architect of the gods and demigods himself designed and built this city. It was an important port and the gateway to the Indian mainland. At the end of Dwapara Yuga, when Lord Krishna went back to his abode in Vaikunta, a huge flood submerged the city of Dwaraka under the sea. The lost city of Dwaraka has been the subject of research for several years and evidence has been unearthed by Archeological Survey of India and National Institute of Ocean Technology that suggest the possibility of an ancient city having thrived once in 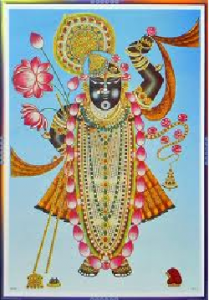 the Gulf of Khambhat region.

The modern city of Dwaraka is on the Indian subcontinent and is one of the 108 Divya Desams (temples sung by the Azhwars) and hence an important pilgrim spot. It is here in Dwaraka that Sant Mirabai left her mortal coil to become one with Lord Dwarakadeesh. The deity, Lord Dwarakadeesh, appears as the King of Dwaraka.

Sri Swamiji too has visited Dwaraka and has had the darshan of the Lord. He describes the Lord in a song which is presented here.

I meditate upon Lord Dwarakadeesha

He carries the conch, discus and the mace
And his chest is decorated with saffron