Damodara Leela – Bound by the Cord of Unalloyed Love! 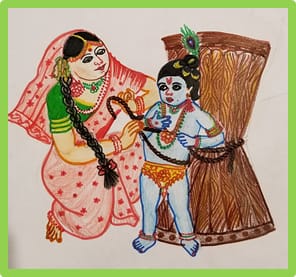 All the Gokula and Brindavana leelas very vividly bring out this quality of the Lord. He was the life and soul for all the devotees of Brindavan and they totally dedicated themselves to His service alone and He in turn had great delight in being bound by them.

Sri Shuka, in Srimad Bhagavatam, expounds this particular quality of Bhagavan in the story of “Damodara Leela” – the leela where mother Yashoda bound Krishna to a mortar with a rope.

Sri Shuka begins this episode thus. One fine morning, Yashoda in her house in Gokula, started eagerly to churn the curd all by herself for her little darling. She had great joy in churning the curd because this was Krishna kainkaryam for her and she wanted to do it all by herself. While churning the butter, she was singing about the wonderful childhood pastimes of her Krishna – the navaneetha chourya leela, putana moksham, shakatasura bandhanam, mrudh bhakshanam and so on and was revelling in His thoughts.

Sri Swamiji also in one his kirtans, “kaiyaithADA gOkula ramaNa”, very beautifully recounts all the Gokula and Brindavana leelas of Bhagavan.

As Yashoda swayed the rope back and forth around the rod, her earrings dangled and her bangles moved about in her hands. This sound of the churning of curd along with the jingling sound created by her bangles woke up little Krishna who was sleeping. Rubbing His sleepy eyes, Krishna came up to Yashoda, hugged her and very sweetly pressed his cheek against hers from behind. By these loving gestures, He gave so much joy to Yashoda and also conveyed that He was hungry. Yashoda fondly took Krishna in her lap and fed him milk as she lovingly admired his beautiful face that was lit with a smile. Suddenly she heard the sound of the boiling and overflowing milk that she had kept on the hearth in the kitchen. Hurriedly placing Krishna down from her lap she ran into the kitchen to remove the milk from the hearth.

Krishna whose hunger was not yet appeased, was not satisfied drinking His mother’s milk and became very furious. Great bhaktas exclaim, He whom the Upanishads praise as “nityatrupta” (ever contented in all respects) is “atrupta” (discontent/not satiated) for mother Yashoda’s mAtruvatsalyam – for He never felt satiated with all the love and affection that His mother showered on Him.

Why did Yashoda give so much importance to that milk in the kitchen while Lord Krishna Himself was on her lap drinking her own milk?

Mahatmas say that the true reason why Yashoda ran in to save that milk was because that too was meant for Krishna and only if that milk was saved, she could churn and get butter for her dear Krishna. That is why it was so important to her. Mother Yashoda had such deep affection for Krishna that every single action and thought of her’s was focused only towards Him.

Nevertheless, Krishna was very displeased that Yashoda had left Him. His lips turned red as they quivered in anger. He wanted to show His annoyance and so he smashed the pot with a piece of stone, broke the churning rod and snapped the rope into pieces by biting it. He did all this while continuing to whine. He then saw a pot of butter in the corner and happy at seeing that, he took the pot in his hands, and with eyes brimming with tears went to a secretive place and started eating all the butter. Though he was crying all through, Sri Shuka says, he was shedding only false tears for how can Krishna really cry when His hands and mouth were full of his favorite butter? Yashoda on coming back was shocked to see the place in a mess – the pot was smashed, the curd had spilt all over the floor, the churning rod was broken and more than anything, her naughty Krishna was missing there. Still He had left a clue for His mother to find Him – His buttery footprints had left a white trail that lead to where He was.

This is the reason why we draw the footprints of Krishna with rice flour, on the day of Krishna Janmashtami, reminding us of Krishna’s foot prints soaked in curd.

Now Krishna was seated on a mortar which was turned upside down giving away butter happily to all the monkeys. Sri Swamiji would interestingly say here, Krishna gave butter to the monkeys and also smeared some on their body just for fun while even to this day we smear Anjaneya with butter (veNNai kAppu). It was Krishna who had initiated this ritual long ago and perhaps He wanted to do something in return for all the service that Hanumanji had rendered to Him in the previous Yuga!

Seeing Yashoda coming, he looked at her with eyes full of fear and mischief. Yashoda slowly sneaked behind her naughty son with a stick in her hands to admonish him. As soon as Krishna saw her, He immediately jumped from the mortar and and began to flee in fear. Yashoda ran as fast as she could behind this prankster, but Krishna was so swift that she could not keep up with Krishna’s pace. The braids of her hair loosened and the flowers fell to the ground.

Sri Shuka is absolutely dumbfounded seeing this. He whom the Upanishads declare to be faster than mind was being chased by this Gopi! He exclaimed at this wonder saying, “Yashoda is trying to catch hold of that Supreme Being whom even the great Yogis cannot capture in their minds!!”

Yashoda was now really exhausted. Krishna saw his dear mother’s fatigued form and took pity on her. He decided to allow Yashoda to get hold of him. By doing this, Krishna shows us that He can be attained by us only through His own compassion and not by our efforts.

As Nammazhwar says in his pasuram –

“pathudai adiyavarkku ELiyavan, pirargaLukku ariyA vithakan” meaning, “He is easily reachable to those who in their hearts nourish such deep love and affection (bhakti) towards Him and is distant for those bereft of it.”

Due to His infinite compassion, he simply allowed Himself to be bound.

Krishna was now guilty but like any ordinary child pretended to look very pitiful and innocent. He rubbed his eyes with his hands and the collyrium from his eyes got smeared all over his face making his eyes look very teary, red and puffed up. He now looked up at his mother with eyes full of fear. Kunti Devi reminiscing this leela of Krishna praises Him saying, “He whom Fear-personified is itself afraid of, actually shows Himself to be in fear!” (bhaya-bhAvanayA sthitasya).

Yashoda wanted to reprimand Him but at the same time she was so full of love and affection for Him that she could not bring herself to beat or scold Him, when His eyes full of fear and tears. She dropped the stick and decided to punish Krishna by tying Him to that same mortar that he was sitting on. Once again here Sri Shuka is overwhelmed seeing how Yashoda in all her motherly affection, being oblivious to the greatness and glory of her son, actually sought to bind Him!

Being wonderstruck he says, “He who pervades all space and time, who has nothing exterior or interior to Him, who exists before and after; inside as well outside the universe and is indeed the universe itself, with nothing in the world that is other than Him to bind Him at all, that Para Brahmam was being bound by this cowherd woman!”
(na chAnthar na bahir yasya na purvam nApi chAparam |
purvAparam bahischAntharjagato yo jagachhayaha ||)

Sri Shuka is unable to fathom the soulabhya – the simplicity of this incarnation! Just like Sri Shuka, the great saint, and Azhwar Nammazhwar too, just as he started writing this leela, entered into a state of trance and it took him six months to return to the normal state to complete writing the pasuram. Such is the soulabhya or the simplicity of Krishna avatara that it bewilders even the jnanis.

The great Krishna Bhakta, Leela Sukha too in his work called KrishnakarnAmrutham exclaims, “Upanishad artham ulookale nibaddham” – the import of all the Upanishads, the Supreme Brahman now stood bound to a wooden mortar!

Now when Yashoda started binding Krishna another miraculous leela was in store. The two ends of the rope that Yashoda used did not meet at all and fell short of two inches. So Yashoda tried joining another rope to it and to her utter surprise that too fell short to make the final knot. She repeated this with multiple ropes and to her sheer amazement the ends of the rope never met. Puzzled, she finally sat down in exhaustion smiling at all the Gopis who were all laughing at Yashoda and were equally spell bound to witness such a feat. Krishna now again compassionately gazed at His mother. He saw how she had exerted herself all this while. Her hair had gotten disheveled and drops of sweat were dripping down her beautiful brows. Seeing the plight of his mother, Bhagavan thought, “Oh my dear poor mother!, let me get bound now!” and out of sheer compassion He let himself be bound once again!

Sridharacharya here says, the two-finger width length that fell short represents, surrender and extreme compassion that is triggered by such surrender. When Yashoda became tired and helpless, she gave up all her efforts and surrendered and that triggered Krishna’s compassion and He allowed Himself to be bound. Sri Shuka experiences horripilation all over his body while thinking of this unique and rare blessing bestowed upon Mother Yashoda.

He says, “This supreme blessing that Bhagavan showered on Yashoda, neither Brahma, nor Lord Shiva nor Goddess Sri was bestowed with!”

The all powerful Lord, one whose name when chanted can release one from all worldly bondages actually got Himself bound for the unprecedented love of His Mother. This shows that the Lord can be attained only through pure devotion – the journey itself being sweet and enjoyable!

Finally Yashoda now tied Krishna to the mortar and Krishna became “Damodara” (“Dama” in sanskrit means rope and “Udara” means waist). The name “Damodara” is also one among the 1000 namas in Vishnu Sahasranamam. Bhaktas say that even now Krishna has this mark of the rope in his belly. This leela is also known as “ulookala leela”, for Yashoda tied him to the mortar which is called “ulookala” in Sanskrit.

Our Swamiji too, sings a very beautiful kirtan on this leela of Lord Sri Krishna which we shall enjoy here!

Pallavi
Krishna got bound to the mortar!

Anupallavi
The Supreme Being extolled by the Upanishads as having nothing exterior or interior to Him and,
who has neither a definite beginning, end, or anything in between!

charaNam
Like a frightened boy, He ran here and there and,
the Gopis stood laughing merrily at Him.
Bound by the selfless love and affection of his mother Yashoda,
the blue-hued boy submitted Himself to her.