Your Mind is verily Brindavan! 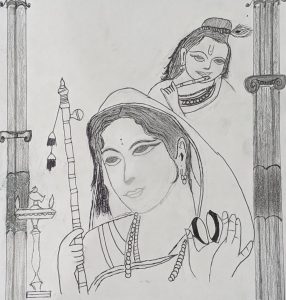 Last few months, we have been enjoying various kirtans of Sri Swamiji on the Holy Land of Brindavan, where Lord Krishna has sported innumerable pastimes. The entire soil of Brindavan has the imprints of the Lord and is therefore verily Divine! (‘Brindavan rajas’) But, for Lord Krishna, what makes Brindavan very dear to him is that it is filled with the footprints of his dear Radha Devi (rAdha charana rajobhishiktham).

When a devotee immerses himself in Krishna Bhakti by listening, singing and constantly remembering the glories of the Lord, the Lord enters his heart and resides there. And, wherever Lord Krishna is, it is verily Brindavan!

And, what does the Lord do in the devotees’ heart? Of course, he sports various leelas (pastimes) there. Oothukadu Venkatakavi has composed beautiful songs on Lord Krishna describing various leelas of the Lord. His Kaliya Narthana Thillana is a well-known master-piece, in which he intricately describes the dance of Lord Krishna on the poisonous snake Kaliya. But, he was blind by birth. So, how did a blind devotee like him describe the dance so vividly? It is because the Lord played the various leelas in his heart and he was able to ‘see’ with his mind’s eye.

There is a similar incident in Mother Meera’s life that shows how the Lord sports the pastimes in the devotees’ hearts. When Mother Meera and Rana (her husband and the king of the Land) went on a pilgrimage to Brindavan, Mother Meera went around identifying the various spots in Brindavan, where the Lord had sported. Rana was surprised because this was Mother Meera’s first trip to Brindavan. Yet, she was able to describe the various places in detail. When he asked her how she knew, Mother Meera replied that she had seen these leelas in her heart. A devotee’s heart is verily Brindavan!

A devotee who is constantly witnessing Lord Krishna’s leelas in his heart eventually starts to view all that is happening around him as Lord Krishna’s leelas as well. He starts seeing the play of God in everything. Once, during Arudhra festival (the day of the dance of Lord Shiva), Ma Devaki, a devotee of Yogi Ramsuratkumar wished to see the Master performing Lord Shiva’s dance. Sometime passed. Suddenly, a gust of strong wind rustled the leaves of the tree they were sitting under, making a musical sound. Yogi Ramsuratkumar looked up at the leaves moving in the wind and said, “Devaki, Shiva is dancing.” Two or three birds swooped low and flew across their group. Again, he turned to his devotee and said, “Devaki! Shiva is dancing”. As he was talking to the devotees, he looked on the ground and there was a centipede or millipede crawling. Again, he said, “Devaki! Shiva is dancing”. Thus, Yogi Ramsuratkumar showed his devotee that day that the Lord’s dance could be witnessed everywhere in His creation! Thus, the devotee starts seeing the play of God in everything.

As the devotee steadily progresses spiritually, just as how a bird comes to eat a fruit on a tree, exactly when it is ripe, not when it is a flower or when it is still raw, a Guru comes to guide the devotee. By Guru’s Grace, the devotee’s love for the Lord grows further and he finally attains the purpose of his birth – union with the Lord.

Sri Swamiji has described this spiritual progress in the Madhurageetham – “Brindavaname un maname….”. It is a short composition, but in those four lines, Sri Swamiji details the spiritual progress of a devotee, the inner transformation, how finally the Grace of a Guru leads him to the Supreme! The lyrics and meaning are presented below.

Brindavanam is verily your mind

By Guru’s Grace, it (bhakti) grows

And, one fine day, it (mind) merges with Him (Lord Krishna/Guru)