Instructions to Yogamaya – The Greatness of Durga Devi

Last month, we saw how the Bhagavan conveyed the message about his descent on Earth through Lord Brahma. Meanwhile on Earth, it was the wedding of the Bhagavan’s would-be parents – Vasudeva and Devaki. As they set out in a procession around the city with Kamsa (Devaki’s brother) himself, driving their chariot, suddenly a voice in the sky announced the impending death of Kamsa at the hands of Devaki’s eighth progeny. In order to pacify Kamsa, Vasudeva was forced to promise that he would give Kamsa all the children born to them.

In course of time, Devaki gave birth to six sons one after another. Kamsa killed all of them. Devaki then conceived the seventh child. 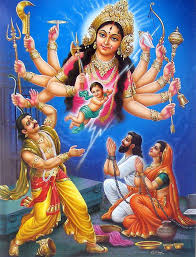 As the time for the Bhagavan’s descent neared, the time for Durga Devi’s service to Him also came. He called Yogamaya (Goddess Durga Devi) and asked her to proceed to the land of Vraja to carry out two tasks and aid His Divine Play – First, He told her to transfer the seventh child (who was none other Adi Sesha) to the womb of Vasudeva’s other wife Rohini, who was living then in Gokula. Second, Bhagavan asked Devi herself to be born to Yashoda in Gokula at the same time that He would be born to Devaki in Mathura.

For this service, He said, the entire world would glorify her in Kali Yuga with numerous names, praises and worship!

Goddess Durga carried out the Lord’s instructions, and then went and settled in Mother Yashoda’s womb.

Since then, She is always known as Bhagavan’s sister, and One who unites the devotee with Bhagavan Sri Krishna.

The Gopis and Rukmini Devi sought Devi’s blessings and prayed to her to help them attain Bhagavan. The little girls of Vraja, observed a vow for 30 days in the cold winter season. They chanted the following mantra,

Inspired by this, Andal, a great devotee from South India too observed a similar vow and sang 30 songs (pasurams) that is known today as Tiruppavai.

Similarly, Rukmini Devi too, on the day of her wedding to Sishupala, went to the temple of Goddess Durga to offer her obeisance and prayed to attain Lord Krishna.

Sri Swamiji has sung a beautiful song on Goddess Durga in raga Durga itself, in which he extols her virtues and says how She is always there with Krishna’s devotees. He describes how she played a role in the Lord’s Divine Play and aided the bhakti of the Gopis of Vraja and Rukmini Devi. In the song, Sri Swamiji also says that She bestows musical knowledge on Krishna’s devotees and also removes their sorrows.

The lyrics and meaning are presented below. Listen to a recording of the song here from www.madhuragitam.org website.

Meaning:
Goddess Durga will be with us
Everywhere, forever!

Following Lord Krishna, that day, she
Took incarnation in Yashoda’s womb in Gokula

Accepting the vow of the little girls,
She bestowed the fruits of the vow that very minute

When Rukmini Devi worshipped her, She freed her from the shackles of Shishupala
And enabled her marriage with Lord Krishna

Devotees singing the praises of Lord Krishna,
Are bestowed the nuances of music (by her)