Sri Swamiji looks upon Lord Srinivasa as his father. He has composed innumerable songs, a set of 8 slokas on Him known as Srinivasa Karavalambanam and a beautiful gadyam.

In Sanskrit, there are predominantly two types of compositions – padyams and gadyams. Padyams are typically in poetic form. They are set using metric rules. Whereas, gadyams are composed in the form of elaborate prose. 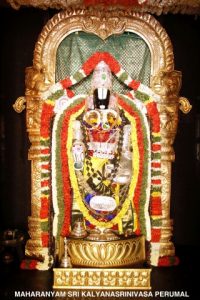 This gadyam on Lord Srinivasa describes His beauty and His qualities and concludes with a prayer seeking refuge unto Him to help us cross this ocean of samsara.

The lyrics and the meaning of the Srinivasa Gadyam are presented below.

The One who resides in the hills that are equivalent to Vaikunta, The One bearing Conch and Discus!
The One who has the glory of being extolled by all the Nityasuris (Azhwars)

The One on the banks of Swami Pushkarini! The One who resides in Ananda Vimana!
The One who has Nitya utsav (celebrations everyday), The One who protected Bhrigu Muni

The delighted Venkatesha! The friend of one who is in trouble
The Protector of orphans, The One who takes care of the ones who have come to Him!

The One who destroys the enemies of those who seek refuge in Him, The reliever of suffering due to the effects of planets,
The One who is served by the immortals, The One who resides in a forest filled with lot of flowers and trees

The Foremost among all the Gods! The One adorning thousand garlands

The protector of common people,

The One who is pleased with just the chant of the Divine Name! The King of kings! The majestic One!
The One who is with Sridevi and Bhudevi, The One who uplifted the Vedas

The One who is extolled by Narada and Tumburu

The One who is decorated with garlands of different varieties of flowers
The One who is adorning the crocodile-shaped earrings, The Lotus-eyed One!

The Son-in-law of Akasha raja, The One who is served by sages and the demigods
The One who enjoys sporting in the forests of Seshagiri

Please uplift this pitiable one who is caught in the cycle of samsara.
O Lord Srinivasa who is along with Padmavathi

I have nobody else to take refuge in. You are my sole refuge