Once a devotee asked Bhagavan Yogiramsuratkumar, ‘How do I see God?’

Yogi replied, ‘NO NAME, NO FAME, NO SELF-INTEREST — Only with these, it is possible!’

A story in the Puranas goes thus – An elephant named Gajendran was caught in the mouth of a crocodile as it went to drink water. In spite of help from a thousand other elephants, it could not get relieved.  It was then that it called out to the Lord and He came down to help. 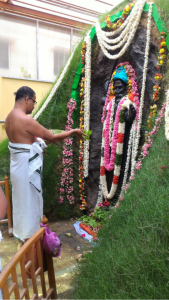 In Tiruvannamalai lived a Mahatma by name Yogiramsuratkumar. He was once in Tirukkovilur where the ‘Tapovanam’ of Swami Gnanananda is located. River Pennaiyar flows through this town. Next to the river is the Samadhi of another Mahan called Ragottama Swami.  It was his Aradhana day and thousands of devotees had gathered there.

A little boy went to take bath in the Pennaiyar river. His leg got stuck in between two huge rocks in the river.  The river was in full spate so no one could enter the river to save him.  Panicked, people rushed to Swami Gnanananda and surrendered unto him, requesting him to save the boy.

Saying that there was another powerful person carry out that task, Swami Gnanananda summoned Yogiramsuratkumar to save him.

Yogi went to the banks of the river, and swaying his hand-fan, uttered ‘Sri Ram, Jaya Ram Jaya Jaya Ram!’ and behold! The rock broke into a thousand pieces!

Later, Yogi moved to Tiruvannamalai and used to live under a peepul tree there. One night he was sleeping under the tree with other devotees. Around midnight, suddenly Yogi arose saying, ‘This beggar has an important job’ and started walking. Others followed him. A mile or two away, there was a large farm land, and in the center was a huge well that irrigated the land. The well did not have walls, and a horse had fallen into it.

“We need to save the horse”, said Yogi. Looking at the sheer size of the fallen horse, the people around said, ‘Let us call the fire station’.

Yogi replied, ‘If you can save the horse, go ahead.  Otherwise, leave it to this beggar.’

Puranas say that the elephant Gajendran who was in pain, cried out to the Lord and the Lord arrived from Vaikunta to save it.

Now, it was this horse. No one knew how or when it cried out but Yogi was there to save it!

Yogi went around the well twice and then, swaying his hand-fan, chanted, ‘Om Sri Ram! Jai Ram! Jai Jai Ram!’. Then, just as we watch in a movie, the horse gently jumped out and ran away! This is not a made-up story. Even today, there are people who had witnessed this event.

In our life we enjoy or suffer depending on our sins(‘paapa’) and good merits (‘punya’).  The imprints of our past deeds (‘prarabda’) follow us. No one’s life is filled with just happiness or just sorrow. Life is a mix of both happiness and sorrow. In such a life, when we encounter misery, instead of wailing, if we cry out the name of the Lord, irrespective of the condition and situation, He comes down to help us.

Yogiji’s Jayanti was celebrated on December 1.