This month we shall enjoy a quelish related to an ‘alankara’ in one of the Sri Madhurageethams. 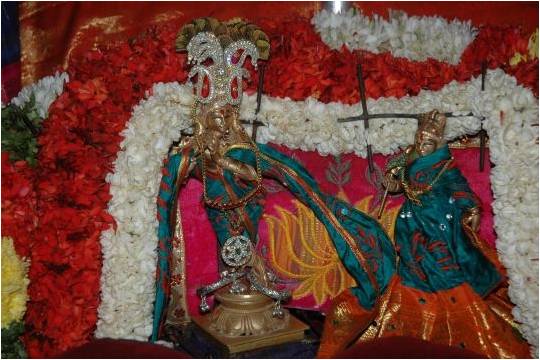 Question to Relish: Name at least one Sri Madhurageetham with ‘Ninda stuti’

Each and every Sri Madhurageetham is an avataranam, akin to the divine descents of Sri Ramachandra Prabhu and Bhagavan Sri Krishna. These Madhurageethams are also descended from a divine realm, from Sri Swamiji’s divine experiences. They are outpourings from Sri Swamiji’s heart – one that is ever immersed in the highest consciousness and overflowing with rasa. These supernal blessings are imbued with bhava and ornamented with embellishments such as raga and tala.  One such literary embellishment, alankara, which adds to the sweetness and greatness of this Sri Madhurageetham is the ‘ninda stuti’!

A ‘ninda stuti’ is always sung out of love for the Divine. Ninda stuti can be explained as adoration expressed through sarcasm. A more generic name for ninda stuti is Vyaaja stuti, literally meaning criticism in speech but adulation in the heart, where the song appears to be censuring or blaming, but the real intention is a praise.

A Sri Madhurageetham that perfectly fits this embellishment of ninda stuti is,

This wonderful Sri Madhurageetham, talks about Sri Swamiji apparently condemning Bhagavan for spoiling his worldly life – a life caught in the shackles of bondage and desires. Therefore, in essence this is actually the greatest praise on Bhagavan for shielding him from the humdrum of this material existence and embracing him in divinity.

Many Mahatmas have sung several songs as a ninda stuti to express their love for their deity. Many Rama bhaktas like Saint Thyagaraja and Sant Bhadrachala Ramadas have taken liberty with the Lord and expressed their affection passionately in their songs as ninda stuti.  Sri Oothukadu Venkatakavi too in his song, ‘senDRu vA nI rAdhE indap-pOdE’ which is a conversation between Shri Radha Devi and her Sakhi uses this alankara.  Radha Devi’s sakhi does the ninda and stuti of Bhagavan Sri Krishna to Radha Devi who is awaiting longingly for Bhagavan’s arrival.

The Gopis of Brindavan express this very same bhava in one of their nectarine geetams in Srimad Bhagavatam known as Brahmara Geetam.

Uddhava Swami, Sri Krishna’s cousin, friend, dear devotee and minister was the disciple of Sage Brihaspati from whom he learnt all the arts and sciences.  Uddhava Swami was awed seeing the pure unprecedented love of the gopis.  Bhagavan Sri Krishna blessed and sent Uddhava Swami to Brindavan for him to witness the love of the Gopis and relish their sweet Brahmara Geetham.  Sri Swamiji would say that Uddhava Swami was under the tutelage of the great intelligent sage Brihaspati and gained such mastery of knowledge only to understand and relish the verses of the nectarine Brahmara geetam.

The ninda stuti in Brahmara Geetam is very vividly portrayed in the 18th sloka.  Sri Swamiji loves this verse where the Gopis say,

Whoever listens to even a little of Sri Krishna’s supremely delightful pastimes (leelas) that fall as nectar on their ears, completely disengages from all the natural propensities of love-hatred, happiness-sorrow, etc., to the extent that they leave their home and all worldly attachments and lead a life of mendicants deprived of (all) enjoyment, like so many birds.

The Gopis exclaim, “Krishna! You have sent a wonderful emissary called Uddhava Swami who is trying to tell us your glories! Who wants to listen to Sri Krishna Katha? What does Sri Krishna Katha do?  Sri Krishna katha – glories of Lord Sri Krishna, nectar as they are, when they enter in through the door of the ears and touch the heart of normal people even inadvertently, annihilates the sense of dualities and completely uproots the natural propensities of mind. The taste of a drop of this nectar turns an ordinary human being into a mendicant completely devoid of any attachment. They leave their home, family and all sensual pleasures. The sense of dualities that are absolutely difficult to conquer are very easily destroyed, by not Sri Krishna’s grace, but purely by Sri Krishna Katha’s grace!”

Thus the Gopis are complaining, apparently they are doing ninda, criticizing Sri Krishna’s katha, while actually they are praising it.  This is the beauty of this ‘Ninda Stuti’.

‘kaN paDudhal’ can have both a positive and negative connotation. As a normal translation, it means in a negative sense, what we call casually as ‘dhrishTi’ or ‘casting an eye’ on someone or something.

But here, ‘kaN paDudhal’ also refers to ‘krupA kaTAksham’, the eyes that shower the grace of compassion on the devotee.

Sri Swamiji in one of his another rasomaya Sri Madhurageethams too, sings of the great amazing glance (ati Ascharya kaTAksham) of Sri Radha Rani, as that which bestows all the fruits of life and liberation immediately and effortlessly.

NachiyAr (Sri Andal) too in her Tiruppavai pasuram asks Bhagavan, “chengaN chiru chiridE en mEl vizhiyAvO?” (Won’t you actually roll your eyes and look at me from the corner of your eyes and shower your grace?)

Such intricate but seamlessly woven embellishments aptly blended in with their meanings is impregnated in this Sri Madhurageetham.

Now let us enjoy this kirtan, rich in bhaava, lyrics and poetic touch and one with incredible depth and relish.

Pallavi
kaN paTTadhu en ulaga vAzhvil
Eyes were cast on this worldly life of mine,

Based on Sri Ramanujamji’s insights into the Sri Madhurageetham
Compiled by Nithya Balasubramanian, Pleasanton, CA