Struggles are Stepping Stones for Success

Young Gopal was struggling. He was having a hard time understanding some math concepts, unlike some of his classmates. He was dejected.

He ran to the pooja room and asked the lovely deities of Radha and Krishna silently, “Krishna! Are you not compassionate? Why should you allow me to struggle so much? It is so unfair!” 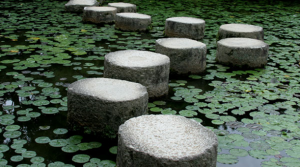 The deities just stood there, smiling at him. Disappointed, he walked out of the room.

He went to the garden, and there he spotted a butterfly cocoon. Even as he was looking at the cocoon, a small opening appeared. Gopal perked up. Curious, he sat and watched the butterfly for a long time as it struggled to force its body through that little hole.

It tried and tried, then it seemed to stop making any progress. It appeared as if it had gone as far as it could and that it could not try anymore. Gopal thought, “This butterfly is struggling just like me! But at least let me help it come out.”

So he got a pair of scissors and snipped off the remaining bit of cocoon. The butterfly then emerged easily. Gopal was overjoyed that he had helped the butterfly out of its struggle. But his joy was short lived. The butterfly didn’t look like a butterfly at all! It had a swollen body and small, shriveled wings. It could not fly. Gopal was shocked!

He watched, hoping it would suddenly turn into a complete butterfly. But no. The butterfly remained crippled.

Gopal cried and ran to his mother. He explained everything, right from his own struggle to the butterfly’s predicament.

Gopal’s mother listened to the entire story, then took him by her side, “Oh Gopu, you see, the struggle for the butterfly to get through that tiny opening was our Krishna’s way of forcing fluid from the body of the butterfly into its wings, so that it would be ready for flight! That struggle was essential for the butterfly. Sometimes struggles are exactly what we need in our life, dear child! If Krishna allowed us to live without any obstacles, it would cripple us. We wouldn’t be as strong as we could have really been! And so we could never fly high in life!”

The lovely flower on deity of Sri Krishna dropped down softly, blessing Gopal’s silent prayer with a subtle answer.
Gopal smiled for the first time that day and wiped his tears away. With renewed strength he went back to his math book, understanding the simple truth of life: Struggles are stepping stones for success in life.