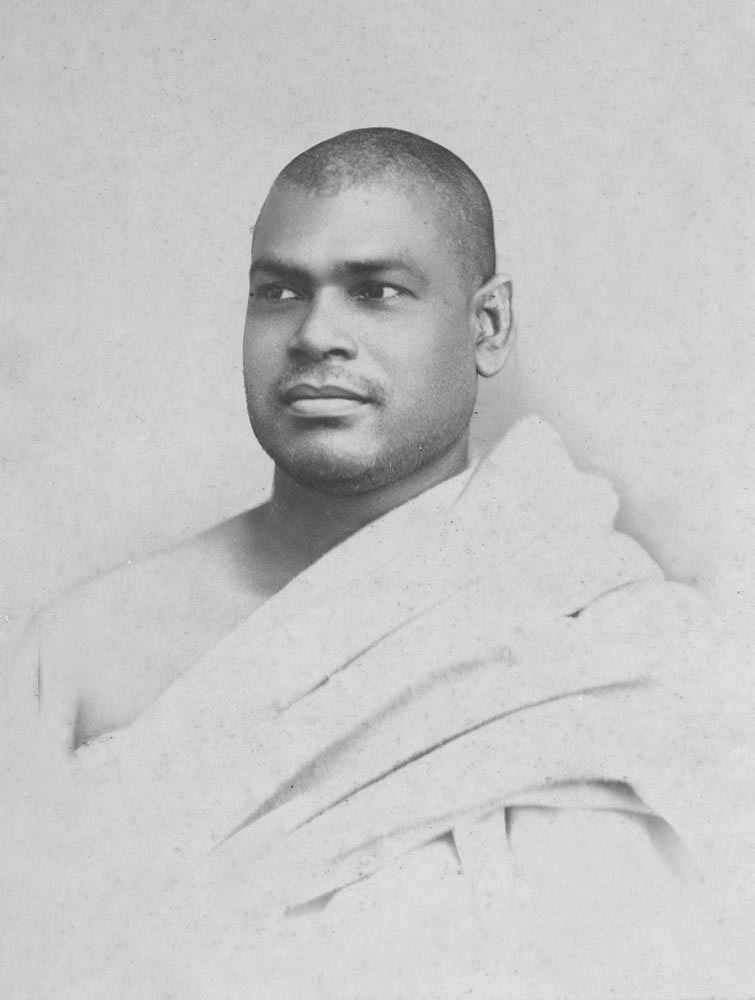 On the occasion of Swami Ramakrishnananda’s 160th jayanthi, which fell on July 26 2022, let us reminisce a special occasion 10 years ago. During the celebrations of Swami Ramakrishnananda’s 150th jayanti at the Ramakrishna Mutt, Chennai, on July 15, 2012, HH Maharanyam Sri Sri Muralidhara Swamiji was invited to speak on the great Guru bhakta. Sri Swamiji’s heartfelt talk moved the listeners to tears, many of them monks from the Ramakrishna Mission. The below extract is excerpted from Sri Swamiji’s talk.

“The worship of the Master by Swami Ramakrishnananda is spoken of highly. He would not allow anyone to come close while worshipping his Guru. He would pick flowers himself, sweep and mop the room floor, cut vegetables and cook the food and offer it to the Guru himself. Those who have been blessed to see Swami Ramakrishnananda sing and dance Namakirtan have said that it appeared as if a high flame swayed this way and that. How deeply he must have taken into himself the divine presence of the Guru! His life was one of great celibacy, tapas, Guru Bhakti, one-pointed devotion, and the single thought of his Guru. 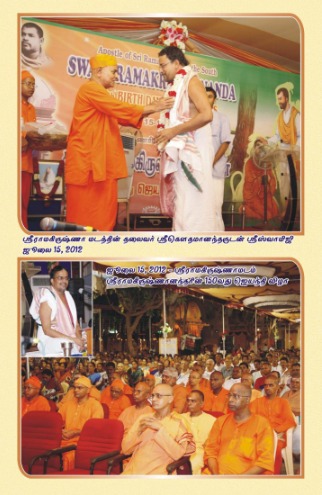 When Shashi (Swami Ramakrishnananda) and his cousin Sharat first entered the room (at Dakshineshwar for the first time), Sri Ramakrishna received them warmly and asked them to sit on the mat on the floor. Highly pleased to see them, do you know what the topic that Sri Ramakrishna spoke to them at first? It was verily about celibacy (brahmacharya)! While speaking on this subject, Sri Ramakrishna asked one of the boys there, “Bring that book from the shelf.” It was the Bible. He asked for a particular message of Christ and then of Saint Paul in it to be read out. Both messages were about celibacy! Sri Ramakrishna has later said to Sri Sarada Ma that it is only because he had, in his bhava samadhi, seen Shashi and Sharat among Christ’s followers that he had asked them to read the words of Christ.

Sri Ramakrishna then asked the young Shashi, “Do you believe in God with form or without form?” The young Shashi said openly, “While I am not even certain about the existence of God how I can speak of God with or without Form?”
Sri Ramakrishna did not even for a moment deem this to be impertinent on the part of the young Shashi, instead, he was highly pleased with his reply. Because it was not spoken on the lines of an atheist. It was not words of impertinence. It was the result of his query regarding Truth. The young mind was seeking to know the Truth. ‘Does God really exist? If He does, is it possible for me to see Him? Is it possible for me to speak to Him? Is this really true?’ One in whom such questions arise would search for the answer. One who has no such query would not bother about it at all! Therefore, Sri Ramakrishna was mighty pleased with Shashi’s answer. He then told him, “Meet with Naren frequently.”

Any advice from his Guru Sri Ramakrishna would be taken seriously and followed at once by Shashi. Once, Shashi heard Narendra chant a Sufi poem and speak of its beauty. The desire to learn the Persian language arose in Shashi so he could enjoy its beauty wholly and bought books to learn the language. One day, as he sat reading them, his Guru called him. But deeply engrossed in the book, he did not hear the Guru. At once Sri Ramakrishna said to him, “Shashi! If you put your mind in such matters even the little bhakti that you have will be lost.” The next moment Shashi threw all the books into the Ganga! How deeply he revered his Guru’s words! He did not keep the books aside with the thought of reading them later; also, he never again showed any interest in learning the Persian language. This only reflects his uncompromising Bhakti for his Guru.

One day, as Shashi crossed Sri Ramakrishna’s room on his way to the Ganga, Sri Ramakrishna called out to him, “Shashi! What you are searching for is here. It is verily Me.” By these words of his Guru he became so committed that never did he go elsewhere in search of any deity; nor did he undertake any pilgrimage to holy places or holy rivers. All that he knew was his Guru Sri Ramakrishna.

Later, while Sri Ramakrishna was living in the Cossipore garden house while suffering from cancer, Shashi stayed with him and served him day and night for three long years. He remained with his Master like his shadow. Even if he was asked to go home and rest he refused to leave but stayed with the Guru serving him diligently. During this period, one night Shashi went up to the terrace to clean the bed pan of Sri Ramakrishna. It was a time when Sri Ramakrishna could not move without assistance. When Shashi returned and lay down, Sri Ramakrishna got up with great difficulty and picked up a blanket with the help of a stick. Noticing this Shashi got up at once and lovingly scolded the Guru, “Sir, am I not here to serve you? Would I not get that blanket for you if you needed it?” At once Sri Ramakrishna said, “No, it is not for me. You had gone to the terrace in this cold weather and I felt you must be feeling cold. So, I picked it up to cover you.” Hearing this Shashi wept.

From the above two incidents we find that when Shashi’s feet had been burnt with heat it was felt by Sri Ramakrishna on his body; and here when Shashi felt cold it was reflected in Sri Ramakrishna’s body. Later, here in Chennai, Shashi Maharaj would fan his Master [Master’s picture in Ramakrishna Math], for he felt the heat suffered by the Master on his own body! Also, when he brought Sri Ramakrishna [his picture] for the first time to the Mylapore Math, it was raining. He held an umbrella over him as he led him. When the ceiling leaked and water dripped down on Sri Ramakrishna he held an umbrella over him all through the night until the rain stopped. Earlier the Guru felt the heat and cold suffered by the disciple and now the disciple felt the cold and heat suffered by the Guru. What state of oneness between the Guru and the disciple! This was because the two were not different; not mere bodies; they stood united as one!

The service that Shashi rendered to his Master during his stay at Cossipore garden house when he suffered from cancer cannot be described in words! He was verily the embodiment of service. He would continuously fan the Master with a palm fan. Sri Ramakrishna would tell him, “Your hand will pain. Stop fanning.” But he would not stop. Sri Ramakrishna would forcefully take it away from him and give it to someone else. Shashi would take it back from him after a few minutes. His fanning service extended even when Sri Ramakrishna was in nirvikalpa samadhi, and also while he had his shave! What a state he was in! What great Guru Bhakti! When Sri Ramakrishna passed away and his body was consigned to flames, Shashi, lost in grief, was not aware of anything. He sat there fanning with the palm-leaf fan and fell down in a swoon. Tarak, Sharat, Rakhal and others knew not how to console him; they found this a worse grief than the passing away of the Master. Shashi collected the ashes and bones of the Master in an urn and carried it back to the garden house on his head. Feeling the presence of the Master even in the ashes, Shashi would every morning place a stick near the picture for brushing his teeth, place water, food, etc. He would fan the Master, set the bed, tie the mosquito net and serve him as he had when the Master had been in his physical form. There was not slightest change in his service.

Later, when the urn containing part of the Master’s ashes was being buried in Kankurgachi Yogodyana and it was being covered with earth, Shashi cried out, “Oh, the Master is in pain!” Hearing this, all those present wept.

What a great Guru bhakta!

While serving his Master during his last days, Shashi could not move away from him even for a moment. He never went home. After the death of Sri Ramakrishna, he stayed at Cossipore garden house for a while. The householder devotees who had been extending help in cash and kind had stopped helping. So Shashi was compelled to return home. But it was not for long. As soon as Swami Vivekananda made arrangements for the young boys, Shashi returned. He stayed along with his brother disciples at the Baranagore monastery. This was an abandoned and dilapidated building. It was the home of several poisonous creatures like snakes and was also haunted by ghosts. The heart of one who reads the unselfish lives of these monks amidst all these, would bleed. The eyes would be filled with tears. They did not have even proper clothing; only the one who went out for bhiksha would wear the one dhoti they possessed, while the rest wore only a loin cloth. Not every day were they successful in receiving food. There were several days when they had no food. On those days the young monks would spend their time in Namakirtan and dhyana! However, Swami Ramakrishnananda who could bear this state for himself, could not bear to see his Master go without food. He had to feed the Master daily!

All the other disciples practiced dhyana and other spiritual practices there. But Swami Ramakrishnananda only constantly worshipped and served the picture of Sri Ramakrishna, which, for him was indeed no different from the living presence of his Guru. And he was the one who fed his brother disciples and ensured that they ate at least something to survive and nourish their bodies.

The day of celebration for Swami Ramakrishnananda was the day when he could offer puri to his Guru. That was the happiest day for him. Nothing else made him as joyous as this. One day, there was nothing to offer as naivedhya to Sri Ramakrishna. Swami Ramakrishnananda became restless. Seeing this Swami Vivekananda said playfully, “We are here without food and you want to feed your Gurudev! On top of it you desire to feed him with puris!” Hearing this, Swami Ramakrishnananda retorted, “Just wait and see. I will make puri and feed Guru Maharaj. I shall also feed all of you with the prasad.” He then approached the neighbor and borrowed some flour, ghee, and potatoes. At three in the afternoon, he made puri and offered naivedhya to the Master and forcefully pushed the prasad into the mouth of his brother disciples who were deep in dhyana!

Thus, Ramakrishna Mission [here in Chennai] is summum bonum of Sri Ramakrishna’s tapas, Swami Vivekananda’s sacrifice, and Swami Ramakrishnananda’s Guru Bhakti. No wonder that Narendra gave the name Ramakrishnananda, which he desired to take for himself, to Shashi at the time of embracing sanyas!”