In Srimad Bhagavatam(10:22:29-35) we find Krishna speaking to the Gopas about the role of trees. Seeing the trees serve Him as parasols shading Him from the scorching sun, Krishna points to the nobility of the trees in living entirely for the sake of others. They take on rain, wind, heat and snow and protect others. Krishna then goes on to say, “How glorious is the birth of these trees which offer support to all living beings just as Mahans (saints) do! No one leaves them disappointed. With their leaves, flowers, fruits, shade, roots, bark, timber, fragrant sap, ashes, pulp and shoots they offer everything that one desires.” Then Krishna says that this is an example for every living being: life becomes meaningful when energy, wealth, intelligence and speech are utilized for the good of others. 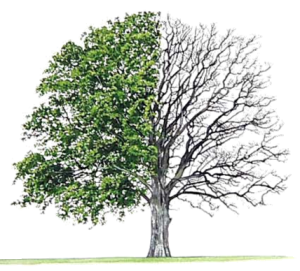 But alas, in utter selfishness, Man insensitively destroys even those who are a support to his life!

Mahans have always decried the felling of trees and inflicting any kind of pain on trees and plants.

One day Bhagavan Sri Ramana Maharshi noticed an Ashram resident atop a coconut tree plucking coconuts. Looking at that devotee Bhagavan enquired what sort of instrument he was using to pluck the coconut. “Is it one made of bamboo or iron?” The devotee replied, “Pick-axe!” Bhagavan said, “If you use this would it not cause pain to the trees? If made of bamboo it will not cause pain to the trees and the coconuts can also be plucked.” Without waiting for a reply he moved away.

The devotee, without paying heed to Bhagavan’s words, continued to use the iron instrument. After a week while he was once again plucking the coconuts he was hit slightly on the nose by a coconut. When someone mentioned this to Bhagavan, he sympathized with him but at the same time commented, “He will now realize what pain is. How much suffering would the pick-axe have caused to those trees who cannot complain?”

Sridhara swami was a highly evolved bhakta of Sant Samarta Ramdas, who served in the samadhi of his Guru. Before plucking flowers for worship he would go around the tree, bow down and speak to the tree, “Do you know how fortunate you are to have been born here close to the samadhi of my Guru, while so many other plants have been rooted elsewhere? When I pluck flowers from you it will pain you but please bear with me because all these flowers that are your children are being offered to my great Guru. It will bestow you with a good ‘gati’ (state).” He would then pluck the flowers softly.

Sister Devamata, formerly known as Laura Glenn and born in an aristocratic American family in Ohio, joined Swami Vivekananda’s newly-founded Vedanta Society in Ohio. Later, she spent almost two years in Chennai, India, under the guidance of Swami Ramakrishnananda, a direct disciple of Sri Ramakrishna. In her book ‘Days in an Indian Monastery’ she writes about an incident during her stay in Chennai.

“…Without meaning to, I grew to be the protector of the banyan beside my door-court. When I saw men stripping whole branches of their new leaves and making them wither for lack of sufficient breathing surface, I would drive them away by clapping my hands and calling in Tamil: ‘Go! Go! I will call the police.’

“One afternoon I was sleeping when I heard the call of ‘Mother, Mother’. I jumped up and ran to the front door and the back gate. There was no one. I looked again. Still no one. Then going out on my verandah I saw a man in the tree with his cloth full of fresh leaves. In the evening when I went to the monastery I told Swami Ramakrishnananda about the incident and asked him if he knew who had called me. “The tree,” was his answer. And he continued: “You were sleeping, your sub-conscious mind was uppermost, so you were able to hear the appeal of the tree for protection.” It seemed a matter of course to him. He used to say that ‘plants were conscious animals without the power of locomotion’.  Everything for him was pulsing with life and consciousness.”

Sister Devamata goes on to quote Swami Ramakrishnanada: “It requires great purity and insight to be able to see the workings of Nature and perceive life and intelligence in every part of her. The whole universe is bristling with omniscience. To an ordinary man this may appear to be a dead, soulless universe, but that man who has the inner eye opened sees that the whole universe is palpitating with life.”

The world famous American horticulturist Luther Burbank said, “The secret of improved plant breeding, apart from scientific knowledge, is love. While I was conducting experiments to make ‘spineless’ cacti I often talked to the plants to create a vibration of love. ‘You have nothing to fear,’ I would tell them. ‘You don’t need your defensive thorns. I will protect you.’ Gradually the useful plant of the desert emerged in a thornless variety.”

In the Vishnu Sahasranama we come across a Divine Name – ‘Pushpahaasan’, that means one whose smile is like that of a flower! But what does this really mean? Sri Sri Muralidhara Swamiji elucidates, “It means the One who is all-pervading (Vishnu) smiles through these bloomed flowers! Know that wherever a flower has bloomed that is verily the smile of the Lord.”

When we inflict pain on the trees and plants it is really done to the Lord! In the Sanatana dharma there are chants that are used while picking darbha grass, etc. These chants seek their forgiveness for the action.

Remembering that the trees provide us with the much needed oxygen apart from shade, rain, flowers, fruits and more, let us, at least for our own selfish end, protect trees and plants.

One Response to "Trees: Conscious and Living!"