The Only Thing We Need to Know!

Infinite Ways to Infinite Bliss—Excerpts from the discourses of His Holiness Maharanyam Sri Sri Muralidhara Swamiji of Chennai, India.

Dhruva was in the forest doing intense tapas (penance) that created fear in the hearts of the Devas. The Devas rushed to Lord Vishnu for protection.

The Lord asked Indra and other Devas, “You Devas are always successful in disturbing a person’s tapas. You send down Menaka or Urvasi and draw him out of his tapas. How is it that you have not succeeded in Dhruva’s case?”

Indra replied, “We tried it on Dhruva, too. But Dhruva began his tapas with his Guru’s Grace. He has received the full blessings of his Guru!”

You should be able to perceive only the Grace of the Guru in everything. You need not understand ‘jiva’, ‘Atma’, ‘Brahman’, etc. You need not know anything at all. All you need to know is Guru Krupa. Why a Satsang? Why the Bhagavatam? This great Bhagavatam is in our hands! How? Only due to Guru krupa! Everything, absolutely everything that happens (and does not happen) to us is only due to Guru krupa! Just know this. You need not know anything else – japa, dhyana, jiva, Atma, Brahman. 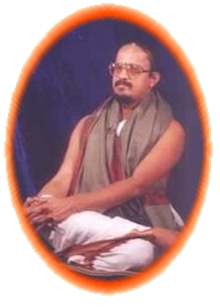 Narada sent the little Dhruva to the forest after giving instructions on how to do tapas. After Dhruva had departed, Narada thought, “The king had sent this child away out of fear of his wife. Nevertheless, being the father he would certainly be concerned about the welfare of his child. Won’t he be anxious about the life of the child, as the forest is filled with wild animals? He might order his soldiers to search for and find Dhruva and return him to Suneethi. This would hinder Dhruva’s tapas!”

Look how the Guru is concerned over the well being of his disciple! The Guru removes the various obstacles. Only those who have been blessed with the company of a Guru will know how compassionate he is. He is a reservoir of mercy. This is realized only by those who have their minds firmly set on the Guru. He is an ocean of mercy. One may use any term to describe it – know that there is nothing greater than the Guru. The Guru pours forth his Grace unconditionally.

Even a deity might punish you for mistakes committed. Suppose, while offering bilwa leaves to a deity, a thorn was also inadvertently offered, the deity would bestow the fruit for both – for offering the bilwa leaves and also the thorn. If a part of the ghee used in a homa were good and part of it bad, you will earn both merit and demerit.

But Mahans will never punish for any wrong done, knowingly or unknowingly. They do not know to punish. To ‘teach a lesson’ is not in their nature. All that they know to teach is Bhagavata dharma!

Sage Narada, the Guru, had only initiated Dhruva into the mantra. But what do we find here? Dhruva progressed in his tapas gradually and attained oneness with the Supreme Lord. How? What does this show? When the Guru initiates you into a sadhana and you sincerely perform it as per the guidelines given by the Guru, gradually He (the Guru) begins to work from within you.