Bhagavan’s Purpose for the Varaha Avatar

This is about Bhagavan’s third incarnation after the dissolution of the universe. The first avatar was Matsya, then came Kurma and then Varaha. The Varaha avatar was unique, as Varaha means boar. The boar is an animal, that is usually considered as dirty and low-class. Knowing this, Bhagavan took the form of the boar to make the boar a holy animal. 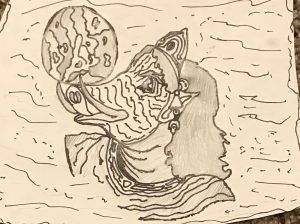 The Varaha avatar took place to stop the havoc on earth. Hiranyaksha and Hiranyakashipu were asuras who had immense power. They were originally the gatekeepers of Bhagavan. Due to a brawl with Brahma’s sons, they got cursed to be born as humans. Bhagavan then told the gatekeepers to not to worry, as they were soon to be reunited with Bhagavan. As a result they were born as asuras, and from that point, they grew in power. With the birth of the evil asuras, Lord Vishnu took two forms to kill each of the asuras. One as a half lion, half man creature. And one as a boar.

When the asuras were traumatizing the earth, Brahma started to pray for Bhagavan to come and save the earth. What Brahma did not expect was that Bhagavan would come out of his nose! As he came out of his nose, he transformed into a humongous boar. Then he came soaring down to the earth’s seas, and held the earth between his two sparkling boar teeth. Just then, Hiranyaksha came to the boar and started to mock Bhagavan’s form, as he did not know better. Bhagavan just smiled and accepted the mocking made by Hiranyaksha, and lo! The insults turned into a garland and rested on the majestic boar. Bhagavan still gave the asura moksha, even with Hiranyaksha abusing him. This is an example of how compassionate the Lord is. Later, Hiranyakashipu was also defeated by the half man, half lion avatar called Narasimha. But that is a different story. Our focus is on the Varaha Avatar. The point is to show that even a terrible person, even when he abuses, still has Bhagavan’s grace.

Our Guru, HH Maharanyam Sri Sri Muralidhara Swamiji himself had an experience with Varaha Bhagwan. Once while Sri Swamiji was discoursing on Srimad Bhagavatam, he decided to skip the Varaha avatar, and focused on other different charitras. That night while he was sleeping, he had a vision. Varaha murthi presented himself, wearing a beautiful garland, and questioned Sri Swamiji why he skipped his charitra. Sri Swamiji then narrated the Varaha charitra the next day.

A few days later, Sri Swamiji visited a Varaha Kshetra. There he stopped in his tracks. He saw that Varaha Bhagavan in the temple was wearing the exact same garland that He had worn when He appeared in Sri Swamiji’s dream. He then questioned Him, “Are you the one who graced me the other  night?” Then to Sri Swamiji’s delight, the garland fell down, as if the Lord was nodding yes in reply.

The truth is that the Varaha avatar was a unique avatar, as the boar is an animal that is not liked by many. But the animal is just a symbol of how even an ugly thing can be loved by all.