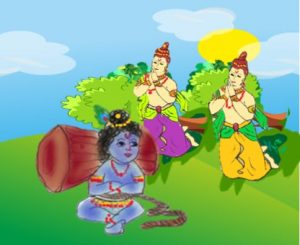 Last month, we enjoyed the Damodara Leela, in which the Lord got himself bound to the mortar by his mother. The Lord then dragged the mortar in between two Arjuna trees and as a result, the two tall trees fell down with a loud thud and two heavenly beings – Nala Kubera and Manigriva, the sons of Kubera, appeared, after having been relieved of their curse. They paid their respects to Little Krishna and disappeared.

As Sri Shuka narrated this, King Parikshith was curious to know why the sons of Kubera had been cursed by Sage Narada. So, Sri Shuka continued. Once, Sage Narada after having visited Kailasa was passing by a beautiful grove on the banks of Mandakini River. This was a special grove that only a blessed few could visit. Nala Kubera and Manigriva, the sons of Kubera were two such heavenly beings with access to this grove. On the day Sage Narada was passing by, they were drinking and sporting in the Madakini river with celestial damsels, oblivious to their state of undress and to Sage Narada. When the Sage saw them thus, he immediately realized that pride and opulence were the causes for their current state. In order to bring them back to their senses, he cursed them. He cursed them to stand as YamalArjuna trees in Nanda Maharaj’s backyard and added that the Lord himself will deliver them from their curse. He also blessed that, when they are thus freed, they will also attain devotion to Lord Krishna.How can one call this a curse? Isn’t actually a blessing in disguise?

Srimad Bhagavatham says, “….tayo: anugrahArthAya shApam dAsyan idam jagau” (…Having decided to bestow his grace on them, he cursed them thus…). When Mahans’ discipline us, even if it is initially harsh, they do it because they have our best interests at heart and always ends in a blessing for us.

To fulfill his devotee, Sage Narada’s words, the ever compassionate Lord, went between the two trees and delivered the sons of Kubera. Just as Sage Narada had blessed, Nala Kubera and Manigriva had reformed and attained devotion to the Lord. Before going back to their abode, they put forth a beautiful prayer to the Lord. In this prayer, they pray that every part of their body and every sense organ should be of service to the Lord.“

“Oh Lord! May we always talk Your glories, our ears hear Your stories, may our hands be engaged in your service, our mind be fixed on Your Feet. May we always remember You, may our head always bow down towards this entire creation which is where You reside and may be always be bestowed with the vision of Sadhus who are no different from you.”

Among these, we will enjoy “Dhanyoham Krishna…” set in Punnagavarali Raga and Adi Tala.

Blessed I am, since I became an object of Your Grace!

By Your Grace, I have been bestowed this human body.

ByYour Grace, I have been bestowed with complete and fully functioning limbs.

By Your Grace, I am blessed to be in the company of saints

By Your Grace, my lips chant Your Divine Names

By Your Grace, I am blessed to read Srimad Bhagavatham

By Your Grace, I listen to the glories of the Lord!

By Your Grace, you are easily accessible to me

By Your Grace, I am leading a pure life

By Your Grace, I have been blessed with pure knowledge

It is by your Grace, I do everything in life!