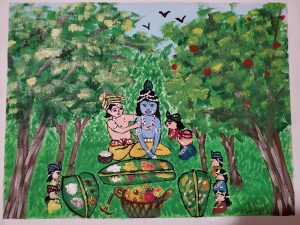 Last month we saw how the little Gopas of Vrindavan enjoyed Supreme Bliss being with Lord Krishna, who being the Lord of the Universe, joined them in their play, like an ordinary boy.

We also reminisced about the Brahmotsav celebration in Madhurapuri Ashram where Sri Swamiji along with the little gopas and gopis, transformed our Ashram into Vrindavan and enjoyed the vana leela.

While Bhagavan, along with the Gopas, was gleefully engaged in playing several games in the forests of Vrindavan, there came a mighty demon Aghasura, who simply could not stand this happy sight.  The demon who was the younger brother of Putana and Bakasura, was sent by Kamsa.  He resolved to destroy the inhabitants of Vraja. He took the monstrous form of a boa constrictor, lying down as a huge mountain with his cave-like mouth wide open.

Lord Krishna and the Gopas started out playing hide and seek. The children decided to hide and Krishna had to go looking for them. Krishna, in spite of being omniscient, acted out and joined their play. The children perceiving the demon to be a beautiful landscape, happily entered its mouth clapping their hands and accompanied by their calves.  At first the children thought that the demon was a mountain, but after examining a little, they doubted it to be a big serpent lying down on the road, widening its mouth. However they believed that Krishna who is the slayer of all the demons would take care and protect them at any cost.  Just as that very thought occured in their mind, Bhagavan who is sarvAntharyami, made up His mind to rescue His companions. With anklets tinkling in His feet, He ran and entered the mouth of the wicked Aghasura. Inside, Lord Krishna grew larger and tore open the demon’s throat, splitting his crown.  Aghasura’s life force departed and he attained liberation. Bhagavan, by His divine touch, revived all the children who had fallen unconscious. The Gods filled the air with joyous melodious music and rained a shower of flowers witnessing the compassion of Bhagavan who granted liberation to even the most wicked Aghasura.

Krishna and the Gopas then made their way to the sandy banks of the river Yamuna and seated themselves in Her shallow waters.  Amidst the fragrance of the surrounding lotus buds, the charming humming of bees and the sweet warbling of birds, the children decided to unpack their mid-day meals. The meal was really special this day since it was prepared exclusively for the occasion of the Vana Bhojana celebration.  The Gopis took extra care to make it all the more tasty, very fondly visualising how Krishna would be relishing each and every morsel. All the Gopas wanting to be seated very close to Krishna, sat around Him like during a divyanAma sankIrtanA. To them the meal was important only because they were having it along with Krishna. Every little Gopa very affectionately offered their special meal to Bhagavan and eagerly waited for Bhagavan to give them His uchchishtam (the remaining part of the food).

Krishna, very tactfully arranged between His fingers, the spicy tangy fruit preparations (made with raw lemons, raw mangoes) that go well with His mother’s specially prepared rich creamy curd rice. He took a nice bite of the spicy tangy fruits and shared its other side with the Gopas; the Gopas would in turn take a bite from it and share the same with Bhagavan.

Shri Shuka (in Srimad Bhagavatham) admires and explains this beautiful form of Krishna dressed in divya pithAmbaram, with flute between his belly and loin cloth (bibhrath veNum jatarapattayoho); his horn and cane under the left armpit (shringa vethre cha kakshe); holding a morsel of cooked curd rice in his left hand (vAme pAnou masruNa kavalam) and all tangy spiced fruits (to be taken along with curd rice) stuck in between His fingers (thath phalAnyanguleeshu); and seated in the center, happily laughing and joking with His friends who were surrounding Him (thishtan madhye svaparisuhrudho hAsayan narmabhih svaihi).

The devas seeing Lord Krishna engaged in these childlike sports are struck in wonder and amazement at seeing Bhagavan’s soulabhya and the fortune of the Gopas of Vraja (svarge lOke mishathi bubhuje yagnyabhuk bAlakeLihi). They exclaim, one who is “YagnyanArAyanan”, one who accepts the sacred oblations that is offered by chanting all the Vedic hymns in a sacrifice as “Yagnyaroopan” and one who protects the yagnya as “YagnyapAlan”, is being sarvasulabhan for these Gopas – heartily sharing their food, laughing and feasting with them. Bhagavan Sri Krishna, Sarveshvaran, gave Himself for the pure sweet motherly love of Yashoda Mata and now he gives and binds Himself again for the innocent love of the Gopas of Vraja.

MahAtmas are unable to fathom the soulabhya of this avataram. Bhagavan seems to be so very easily accessible to the people of Vraja and delight them every minute through His nithyaleelAs; be it His navaneetha chourya leelAs, gochAraNa leelas or the rAsa leela.

Sri Swamiji, in the following Madhuragitam, which is sung as a nAmAvaLi, sings the various leelAs that Lord Krishna did for His dear Gopas and Gopis.  This couplet highlights the quality of His Soulabhya.

With the Gopas, it’s the feast in the forests of Vrindavan,
With the Gopis, it’s enjoying their home-cooked meal.

Happily relishing and enjoying the time with the Gopas,
With the Gopis, having loving passionate conversations.

* It refers to the divine play of Krishna where he teases, angers and subsequently pacifies the Gopis