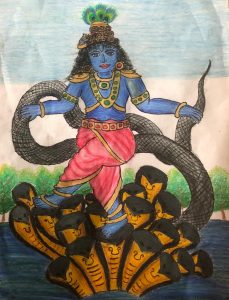 Last month, we concluded the Brahma Mohana Leela. After the Brahma Mohana Leela, life in Brindavan continued. The Gopas enjoyed the blissful company of Lord Krishna and Balarama during the day when they took the cows and calves for grazing in the forest. On one such day, Sridama, Subala, Sthoka Krishna, and others described the beautiful Talavana that was home to beautiful trees bearing tasty fruits. The little gopas desired to eat those delicious fruits. But, that Talavana was guarded by a demon named Dhenukasura.

Krishna, Balarama, and all the other gopas set out to Talavana. When they entered Talavana and started plucking the fruits, the enraged Dhenukasura charged at them. Lord Balarama caught hold of the hooves of Dhenukasura, whirled him around and threw him. This killed Dhenukasura.

Few more days passed. One day, the cows and some of the boys who were thirsty drank water from the Yamuna and fell down unconscious. The Lord brought them back to life just with a glance. The Lord understood the waters of Yamuna had been poisoned.

At this juncture, Parikshit requested Sri Shuka to narrate the leela of how the Lord subdued Kaliya. Hearing this, Sri Shuka began.

In Yamuna, there was a lake whose water was completely poisoned by the serpent Kaliya. It was so poisonous that even birds that flew above that water fell down dead. The breeze from the lake contaminated the surrounding air and therefore, trees and plants in that region died. Seeing this, one day, the Lord, desiring to teach Kaliya a lesson, went alone to the forest, climbed a Kadamba tree that was overlooking the lake, tightened his peetambaram (yellow dress), slapped his shoulders (a sign of getting ready to fight) and dove into the poisonous waters. As the Lord swam in the waters, the ripples created by the Lord disturbed Kaliya. Angry at being intruded, Kaliya looked around to see who had trespassed. At that moment, he saw the beautiful form of the Lord –

He saw the captivating form of the Lord, who was shining like a cloud, had the srivatsa mark, was wearing a yellow dress, and had a beautiful smile on his face. He was playing fearlessly and His feet resembled the inside of a lotus.

Here, we see that Sri Shuka describes the feet of the Lord as resembling the inside of a lotus. Sri Swamiji takes this comparison and expands it further in his Madhurageetham. Not just Krishna’s feet or hands, he says, Krishna himself is like a lotus (tAmarai kaNNan tAmarai kaiyan tAmarai mayamAnavan). The resemblance was so much that even gods wondered whether Krishna was a lotus. (….kaNNanai kaNDu tAmaraiyO ena amarargaL viyandanar).

Seeing him wrapped in Kaliya’s coils, the inhabitants of Brindavan panicked. Some fell down unconscious, some were lamenting and others stood shell-shocked. Nanda baba tried to enter the waters of Yamuna. But Lord Balarama, who had accompanied the residents, stopped Nanda Baba and reminded him of Lord Krishna’s prowess.

Meanwhile, Lord Krishna who saw that His beloved gopas and gopis were in distress, rose from the coils, caught hold of Kaliya’s tail, and jumped on his head. As the Lord was standing on Kaliya’s head, Kaliya, who had 101 heads, tried to raise his various heads to strike the Lord. The Lord skillfully jumped from one head to another avoiding being bitten. Thus began a beautiful dance on the head of Kaliya. With Kaliya’s head as the stage and the gods and demigods playing the accompanying music, Lord Krishna danced on the head of Kaliya. This form of Krishna is known as Kaliya Nardhana Krishna. It is this form that Sri Oothukadu Venkatakavi worshipped and has sung innumerable compositions on Him. One of them, Kaliya Nardhana Thillana, describes the dance intricately.

Similarly, Sri Swamiji too has described this beautiful dance of Lord Krishna. Set in the raga Nattai, the Madhurageetham extols the dance along with the jathi (beat). The lyrics and the meaning of the Madhurageetham are given below.