Last month, we saw the compassion of the Lord when He bestowed salvation to Putana, an ogress who came to feed him poison! When Sri Suka concluded the narration, Parikshith then requested him to continue extolling the lilas of the infant Lord.

Sri Suka was pleased to hear this request from Parikshith. So, he continued. It was a month or so since the brith of the Lord and the Lord’s birth star Rohini was in the ascendant. It was another special occasion too. A baby turning on its back is considered a big milestone in the growth of a child and that day, the infant Lord had reached his first milestone! He had turned on his back on his own(authAnika). Yashoda Mata was exhilarated. She decided to celebrate this occasion with all the residents of Gokula. A holy bath was given to the Lord and several gifts were given away in charities. Holy men were invited to bless the child by chanting divine hymns. As the celebration proceeded, the Lord, having been bathed and fed milk by Yashoda Mata started to fall asleep in her arms. Since the house was crowded, she left him sleeping on the porch, under the shade of a cart. She went back inside to take care of the celebrations.

Meanwhile, the cart who was in fact a demon called Shakatasura – a friend of Kamsa, was waiting for the opportune moment to kill the infant Lord. Although, Srimad Bhagavatham does not explicitly mention this demon by name, numerous Mahans, Krishna ashtothra (108 names of the Lord that is chanted during worship) have referred to this demon. At that moment, the infant Lord opened his eyes and started to cry for milk. He also started to throw his hands and legs in the air. As he did that, his tender feet hit the cart. As soon as his feet touched the cart, the cart flew in the air and broke into pieces. All the items like milk, ghee, butter that were placed on the cart were strewn on the floor. 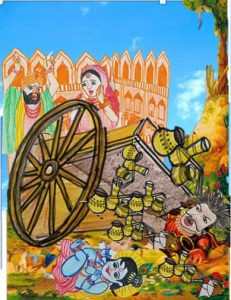 The elders rushed outside and stared at the sight in astonishment. When the young gopas and gopis, who had witnessed the scene explained, the elders could not believe their ears! Instead they simply expressed their gratitude to the Supreme for saving their little boy. Their love for the Lord masked the knowledge of who the little boy truly was!

Days passed. One day, the infant Lord was sitting on his mother’s lap and she was fondling him. Suddenly, she felt as though as her little baby was weighing as heavy as a mountain. So, she placed him on the porch and went inside. As soon as she went inside, a dust storm blew up in Gokula. This was in fact another demon, Trinavarta – a friend of Kamsa, who came in the form of a whirlwind to kill Lord Krishna.

The infant Lord was in fact lying in wait for this demon. Yet, instead of killing him right there, out of concern for the residents of Gokula, the Lord decided to take the demon as far away from them as possible. Therefore, the Lord quickly made himself as light as a feather. and allowed Trinavarta to carry him high up to the sky. The ability to make oneself heavy (garima) or light (lagima) as per one’s wish are part of ashtasiddhis that one acquires by practising severe Yoga austerities. Yet, the infant Lord who was not even a month old was exhibiting them. He was the Supreme himself and therefore he possessed these siddhis since birth and did not have to undergo severe penance to acquire them.

As soon as Yashoda Mata saw the dust storm, she rushed outside. But, she could not find the Lord. Shocked, she swooned and fell down. Srimad Bhagavatham says, she looked like a distressed cow that had just given birth to a stillborn calf. (mrta-vatsakA yathA gau: ). The entire residents of Gokula panicked and prayed for their little darling’s safe return!

Meanwhile, Trinavarta who went high up in the sky, felt as though a heavy weight was pulling him down. It was once again the Lord’s work. He had now made himself heavy again. The Lord then kicked and strangled him with his tiny feet. Trinavarta felt the wind knocked out of him and spiraled downwards, hit a rock and fell down dead. Sri Suka refers to the Tripurasamhara lila of Lord Rudra and compares Trinavarta’s body as resembling the damage that was done by Lord Rudra’s arrows.

Sri Sreedhara, a great commentator who authored, Sreedhareeyam, an authentic commentary on Srimad Bhagavatham, comments, that there is a subtle elegance in the way the Lord handled Shakatasura and Trinavarta. For Shakatasura, the Lord kicked the cart high in the sky with his tender legs whereas, for Trinavarta, the Lord kicked, strangled and pushed him down with those same tender legs! It is only through such Mahan’s commentaries are we able to enjoy such nuances in these lilas.

When the Gopas and Gopis saw that their sweet little darling was safe, they thanked the stars and said a prayer to the divine. Once they had safely retrieved the Lord, they spoke to one another in amazement about the good fortune of the little boy they all adored. They could not see him as all-powerful Lord. Their love for him allowed them to see him as their little boy!

Sri Swamiji has composed a kirtan, “bale aal ivan..” in a bhava similar to these gopas and gopis of Vrindavan. He addresses the song to Yashoda Mata, recounts these infant lilas of the Lord and sings in a tone of amazed wonder. The song is set in Bhairavi raga and misra chapu tala. The lyrics and the meaning are presented below.

pallavi
O Yashoda, He is an extraordinary boy!
The younger brother of Balarama, the infant Gopala

anupallavi
The lady who fed him poison, the cunning demon in the cart,
The evil demon who came as whirlwind, He killed them all!

charaNam
He stands with an innocent smile!
He does mischief and vanishes in an instant,
He radiates in the hearts of the artless sages!
He is attracted by guileless songs of worship!