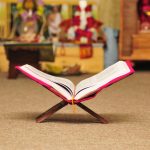 Every incarnation of the Lord has a purpose. In Bhagavad Gita, the Lord says,
“paritrANAya sadhUnam, vinAshAya cha dushkrtAm
dharma samstApanArtAya, sambhavAmi yuge yuge”
I incarnate in every age to protect My devotees, destroy evil doers and to reestablish the dharma in each age.

In Rama Avatar, the demigods prayed to the Lord to save them from the tyranny of the demon king Ravana. Hence the Lord incarnated. Similarly, in Krishna Avatar, Goddess Earth (Bhumi Devi) in the form of cow prayed for relief from her burden. What is a burden to Mother Earth? Is it boring holes in her or digging her, building buildings on her, etc? Mother Earth, out of her infinite patience, tolerates all this and more. But when we, her children, do not live a righteous life or sing the glories of the Lord, it is then that she finds us a burden. Before the advent of Lord Krishna, when demons and sinners ruled the earth and dharma declined, Mother Earth could no longer bear it. So she assumed a form of cow and with tears in her eyes, went and stood before Lord Brahma.

“brahma tadupAdaryAtha saha devais tayA saha
jagAma sa trinayanas tIram kshIram payonidE:”
Lord Brahma along with Mother Earth and all other gods and goddesses went to the shore of the Ocean of Milk.

There he prayed to Lord Narayana who answered all their prayers and revealed his Divine Will to be born as Lord Krishna to relieve Mother Earth’s burden.

In the song “Paarthilayo Govinda..”, Sri Swamiji sings about the purpose of various incarnations of the Lord especially, the incarnation of Lord Krishna. The lyrics and the meaning of the song are presented here.

Meaning:
Pallavi
O Govinda, Have you not seen my plight?
Are you turning a deaf ear to my prayers?

Anupallavi
Having seen and listened to my prayers, are you still not stopping me?
Is it right to let me go wayward like this?