Nama – For Earthly Fulfillment and Beyond

With a clear vision about the current Age, Sri Shuka tells King Parikshit here that this Yuga will have ‘dosha’ (faults) as nidhi (wealth/abundance). But that this Age is also the easiest one to attain the Lord’s Lotus Feet by simply chanting His Divine Names.

These are tough times in this Kaliyuga when we are unable to follow any niyamas (rules) to obtain devotion as the very sustenance of everyday lives has become very stressful. 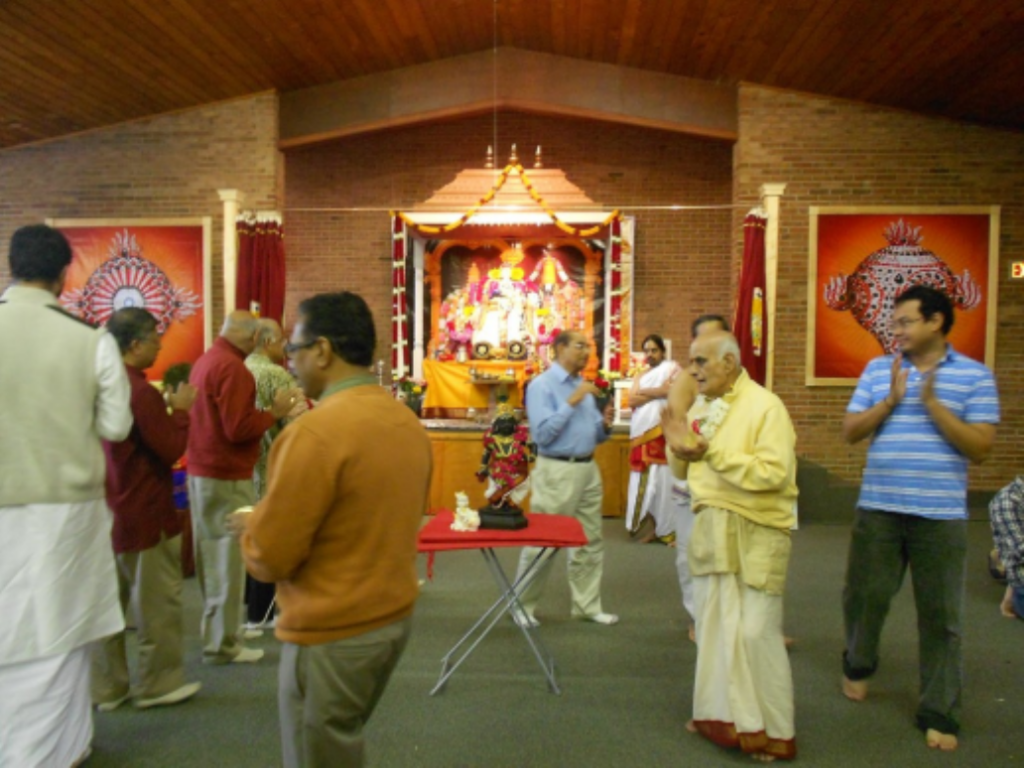 Sri Swamiji and numerous other saints, who care for all of us as a mother for her children, have been very lucid about this and with extreme compassion they plead with us to chant the Mahamantra (given in the Kali Santarana Upanishad)-

— for both the trivial earthly fulfillment and beyond life, to be in His abode. This is the easiest way to fulfill the purpose of human birth in this Kaliyuga. Even mechanical chanting of the Mahamantra with the lips, anytime, anywhere will cause inner transformation and the fall of our egos like how a termite slowly falls the banyan tree. In Papa Ramdas’s words, “One whose lips have the Divine name all the time is indeed a Jivan Mukta, chanting incessantly  is indeed Moksha.”

Ajamila lived the most lowly life committing innumerable sins, but called out his son Narayana’s name at deathbed and attained the Lotus Feet of Bhagavan.

For Mudgalan, the only good deed he ever did was calling the name ‘Gopala’ once and Yamaloka became Vaikunta!

Kshatrabandu did atrocities and lost his status as a Kshatriya. He realized the mistakes he did and went to forest in search of a Guru, while he called out a cowherd’s name ‘Govinda’.  The Guru blessed him that his utterance of the divine name had already fulfilled the requirement to attain bliss.

Sabhari  was a simple huntress with absolutely no knowledge about Bhagavan Nama or Mukti. She did not even ask for anything from her Guru Matanga Maharshi, but he gave her the Rama Nama and blessed that by incessant chanting, she would attain her Guru’s abode when Lord Rama and Lakshmana were witnessing it.

Sant Haridas, an ardent disciple of Sri Chaitanya Mahaprabhu, blessed a prostitute, who was sent to disturb him, with the Mahamantra and she attained the Lotus Feet of Sri Krishna.  See how the ‘Vinnulaga Aasai’ (heavenly aspiration) is fulfilled with chanting the divine name!

Bhagavan himself loves to serve his ardent bhaktas and for  Sant Namadev, He held aloft their little house on a very stormy day to protect the entire family.  The Lord came as Kandiya Krishna to serve Sant Ekanath for 12 years!  For Senanayee, He came as a proxy to be a barber for the king, when the devotee was lost in chanting Vittal nama with sadhus. AnantAzhwar was serving Sri Ramanuja by digging the sand to create a garden to grow flowering plants exclusively for the Tirumala Balaji. He was doing this seva with his pregnant wife and wouldn’t allow anyone else to be a part of this seva. Bhagavan Himself came as a young lad to help him and even bore the hit to his chin given by Sri AnantAzhwar who did not want to share his Guru’s kainkaryam.

Srimad Bhagavatam says that it is extremely rare to get a human birth and even rarer still to have the darshan of a Mahatma who is a realized soul and who is a devotee of Lord Krishna. And to have the opportunity to serve that Mahatma in some way, one should be even more immensely blessed; for that is indeed the rarest of the rare. In this rare ‘nara janma’ (human life), our Guru has taken us all under his abode. All He wants for us to do is just have the Mahamantra in our lips. Let’s pray to Him to give us the determination to chant the Mahamantra incessantly.

Let’s not waste our time in trivial matters; our time on Earth is getting reduced every second. The God of Death has no compassion to extend our life for even a second more. So now is the time to utter God’s Divine Names!