‘Shaking Hands Across Continents’- An Unique Music Concert in Houston

Shaking Hands Across Continents music concert in Houston, held on Saturday, November 7th 2015, was an unique presentation by GOD Houston that brought together both Indian and western music through the compositions of HH Sri Sri Muralidhara Swamiji in several languages including English, Sanskrit,Tamil, Telugu, Malayalam, Kannada and a final song that was sung in 16 different global languages.

The program was a fundraiser for Namadwaar. The Consul General of India Houston Sri.Harish Parvathaneni and his family, and the Mayor of Manvel Ms. Delores Martin were chief guests at the event. Smt.Thara Narasimhan of Hindus of Greater Houston and Megan Flowers, representative of Pearland Convention and Visitor’s Bureau were also present.

The songs of Sri Swamiji that were rendered were:

The western orchestra teacher and students played piano, violin, viola, cello and bass instruments to all the English songs and for Kaliyaiyum bali kollum.

This program also raised a lot of positive awareness about Namadwaar and GOD in the Houston area. Many people were attracted a lot by Sri Swamiji’s songs and by Nama kirtan. The children all sang Hare Rama with great enthusiasm and continued to sing it even after the program.

A support video for the event was prepared and shown where many local community leaders voiced their support for GOD and Namadwaar. 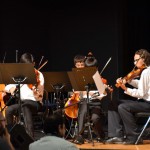 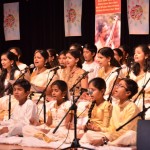 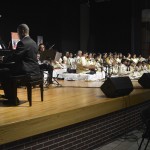 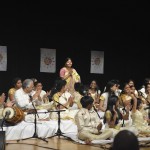 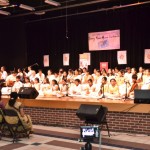