“Let me tell you frankly that I am now convinced that you have a great future in the work for India. What was wanted was not a man, but a woman – a real lioness – to work for Indians, women especially…” 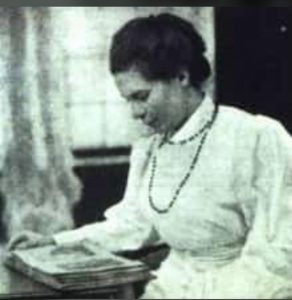 Margaret Elizabeth Noble was born on October 28, 1867, in a small town in Ireland. She lost her father at the tender age of ten and was brought up by her maternal grandfather who was a leader in the freedom movement of Ireland. Thus she developed truthfulness, religious zeal, patriotism and an attraction for politics. A bright student, she became a teacher even at the young age of seventeen, after the completion of her formal education.

She was attracted to religion right from her childhood but her thirst for spiritual knowledge could not be quenched by the formal Church-regulated religious life.

It was in 1895 that she met her Guru Swami Vivekananda for the first time in London. Drawn by his lecture and personality she thereafter attended several of Swamiji’s lectures. She realized that this Indian monk would be able to guide her to the Truth.

Swamiji was also convinced of her truthfulness, determination and above all her compassionate nature. Pained by the state of the common people of India especially that of the Indian women, he felt education was the only way to instil self-confidence in them and uplift them. Swamiji felt Margaret had a great role to play in this and commanded her to go to India to work for the upliftment of women. Leaving behind her home, family, friends and all things familiar, she came to India in 1898 to carry out her Master’s bidding.

Swamiji familiarized her with India and the Indian way of life – India with rich spiritual heritage, great in renunciation and tapas on the inside); and the poverty-stricken, superstition-ridden, suppressed, India on the outside. Gradually she began to love India and accepted her way of life and soon merged into it. Within a few days of coming to India she met Holy Mother Sarada Devi and at once both bonded together.

Swami Vivekananda initiated Margaret Noble into vow of brahmacharya and gave her the name Nivedita. At the time of delivering her, Margaret’s mother had vowed to God that she would offer the child to His work if it was born safely! The child offered at the Feet of God even while she was still in the mother’s womb was later given the exact name – Nivedita (one who has been given/presented) – by her Guru!

Sister Nivedita dedicated herself totally to serve Bharat Mata through serving Her children. At the behest of her Master she set up a girls’ school in Calcutta, which was consecrated by Holy Mother.

In 1899 when the plague broke out in Calcutta she, alongside the sanyasins of Ramakrishna Mission, plunged herself in relief work. She nursed the patients, cleaned the surroundings herself. She never gave thought to the killer disease touching her. Seeing her, several local youths joined the relief work.

Swami Vivekananda passed away in 1902 and in spite of great hurdles she worked relentlessly to fulfil the mission set for her by him. Just imagine a lady of foreign origin working in an extremely conservative society! Parents were unwilling to educate their daughters. So, Nivedita used to walk from door to door to enlist her students. She taught them history, geography, natural sciences and some English. She also taught them sewing, drawing and handicrafts. She encouraged them to take up physical exercises. Above all, she helped them increase their innate sense of religion and introduced them to Indian culture! She also made arrangements so that elderly married ladies and widows could have a little learning and know the art of sewing and other handicrafts. She gave special instructions to a few educated ladies in order to make them good teachers.

Occasionally, in the evening hours, she would invite the local ladies and hold meetings in the open courtyard. Swami Saradananda (direct disciple of Sri Ramakrishna) would discourse. She would sit on one side with the small girls. She often took the students to Dakshineshwar, Belur Math and Holy Mother’s house at Udbodhan. She took them to Zoological gardens and the Museum. She loved feeding her young girl students with sweets and fruits. She tried imprint love and reverence for India and India’s culture and values in her students’ minds. She introduced singing the song Vande Mataram everyday at her school.

One day Nivedita asked her students, “Who is the queen of India?” The girls replied, “Her Majesty the Queen Victoria.” Nivedita was visibly upset when she heard this reply. She cried, “You don’t even appear to know who the queen of India is! Look, Empress of England, Queen Victoria can never be the queen of India! Your queen is Queen Sita! Sita is the eternal queen of India!” Swami Vivekananda had advised Nivedita that in the matter of women’s education one must not move away from the spiritual ideal of renunciation and service. It must be given top place above everything. Nivedita tried heart and soul to follow these instructions of her Master.

She ran the school from the money she earned through her books and articles. Everything was spent on the school. She spent the barest minimum on herself. Many a day she even went without food. She realized that foreign rule was chiefly responsible for moral degradation and weakness of Indians. She strongly felt that the topmost priority for India was to gain national freedom; she, therefore, began to associate herself in politics to lend force to free India from British rule. She toured extensively meeting with youth and student community. Her selflessness, renunciation, austerity and sincere appeal touched their hearts. She taught them to love and adore their motherland. The motherland of Sri Ramakrishna and Swami Vivekananda became her own motherland.

She used to recite every moment, like a sacred mantra, “Bharatavarsha, Bharatavarsha!” She held everything in India as sacred and deserving worship. India was a holy land to Nivedita. Each and every person in India was sacred in her perception. One day the milkman who supplied her with milk asked her to speak something about religion. But Nivedita saluted him repeatedly and said, “You are an Indian! What advice do you seek from me? What is that which you do not know already? You belong to the dynasty of Sri Krishna! I salute you once again!”

Swami Vivekananda felt science was very important for India and was very proud of the renowned scientist Jagadish Chandra Bose. But during the British rule, Bose had to carry on his work under extremely unfavorable conditions. Sister Nivedita, realizing Bose’s worth, helped him a lot, by securing assistance from the British Government, propagating his work through periodicals and newspapers, providing financial help for his research and also nursing him when he fell ill. She looked upon Bose as her child and became part of Bose’s family.

Sister Nivedita was a great orator and powerful writer. She used her pen as the main source of power. She authored many books and contributed articles to various Indian and foreign journals.

A little-known fact about Subramaniya Bharatiyar, the great Indian poet and freedom fighter from Tamil Nadu, is that he considered Sister Nivedita as his Guru. Bharatiyar met Sister Nivedita for the first time when he had gone to attend a meeting of the Indian National Congress. Nivedita asked him if he had not brought his wife along. He explained that following social norms of those days he did not take her out anywhere; he also said that she (his wife) knew nothing about politics. At once Nivedita told him that if he could not give equal status and freedom to his wife how could he expect to get freedom for his country? This kind of dialogue with Sister Nivedita brought about a total change in his attitude towards women; it also prompted him to take up the cause of equal rights of women. Bharatiyar later dedicated many books including Swadesa Geethangal, Janma Bhumi, and Jnanarathnam to his ‘Guru Sri Nivedita Devi.’

All the hardships that Sister Nivedita faced and the tremendous heat of the summer told heavily upon her health. She began to fall ill repeatedly. And in 1911, Oct 13 she passed away when she was only 44 years old.

Never did a foreigner love India so much as did Sister Nivedita. Never have we come across any foreigner who felt so proud about India’s religion and culture as she did, or was so committed to India’s national awakening as she was. By totally dedicating herself to the service of India, Nivedita proved true the name that was gifted to her by her Guru.

Based on content from the book ‘Nivedita of India’, by The Ramakrishna Mission Institute of Culture