The Greatness of Rama

Prince Rama was the 7th avatar of Vishnu. He was born to Dasharatha and Kausalya in the Ikshvaku Dynasty. Rama is the best example of a man who had all the virtues and followed dharma. All through his life he showed many examples of good virtues. 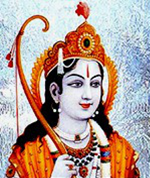 When Sage Viswamitra came to ask King Dasharatha for Rama and Lakshmana’s help to protect his yajna, the king first refused. Then when the Raja Guru explained the facts, he sent the young princes with the sage. Here Rama respected his father’s and Guru’s orders.

Queen Kaikeyi used her two boons from Dasharatha to send Rama to the forest and to make Bharata the king. Dasharatha was devastated. When she commanded Rama to go to the forest for 14 years after her mind was poisoned by Mantara, Rama happily accepted and embraced the fact as it was a way for him to fulfil the promise his father made to her. He obeyed her without questioning though he could have easily refused. He did pithruvakya paripalana (fulfilled his father’s promise). Hence he displayed obedience to parents without protest. Following Kaikeyi’s word and fulfilling his father’s promise showed dharma as well.

While going to the forest he met his childhood friend Guha. Guha was shocked on hearing the state of his beloved friend, so he opened up his home to Rama and was ready to serve him happily. Rama loved him so much even though he was a mere boatman. He embraced him and introduced him to Lakshmana saying he was one of the brothers in their family. He came down so much for Guha and maintained a great friendship with him.

After Sita Devi was kidnapped by the evil king Ravana, Rama and Lakshmana went around searching for Sita ma. On the way they met Sabari, who had been chanting the Rama Nama for years. Before, Sabari had been a hunter without any culture. After meeting her Guru, she was transformed into a great Bhakta. When her guru was leaving to Vaikunta, Sabari was shattered. Her guru asked her what boon she wanted; she said she wanted to be with him (guru). Her guru gave her the Taraka mantra, and she had been chanting it ever since. Every day she eagerly awaited Rama’s arrival. Though she didn’t know who he was, she picked berries every day for him. One day, Rama amazed by her devotion, came to her hut and gave her, his darshan. While he was there she had some berries ready for him. To make sure it was sweet she tasted every one before giving it to him out of her pure innocent love. She gave him the sweet ones and threw away the bad ones. Without thinking that it was soiled by her tasting it, he ate it, because of her true devotion.

As time went on they reached Kishkinda. There the Vanara king Sugriva was living in fear of death. When Hanuman introduced him to Rama, Sugriva took refuge in him. Prince Rama protected the frightened, helpless Sugriva, and killed Vali for him. Once again, Sugriva was made the king of Kishkinda.

Once the Vanaras and Hanuman found that Sita lived in Lanka in the Palace of Ravana, they immediately started preparing for a war with Ravana. Ravana’s brother Vibheeshana disagreed with him and set out to take refuge in Rama. When Vibheeshana came there, everyone except Hanuman suspected him and didn’t trust him as he was from the enemy’s side.  Though everyone was against him, Rama took pity on him, embraced him and not only gave him refuge but also accepted this bhagavata as another brother.

When Ravana was losing the war, Rama was ready to forgive him and leave him alone if he gave Sita back. Rama was kind enough to even forgive the mean king who kidnapped and tortured his own wife, though Ravana refused his kindness out of his arrogance.

After winning the war against Ravana and getting Sita back, though the kingdom was now technically his, he made Vibheeshana the king and returned to Ayodhya.

2 Responses to "The Greatness of Rama"