In addition to emphasizing on bhakti (pure love toward the Lord) and satsang (company of holy) as two strong rungs leading one to Bhagavan, Srimad Bhagavatam extensively outlines moral values through the stories of bhagavatas. 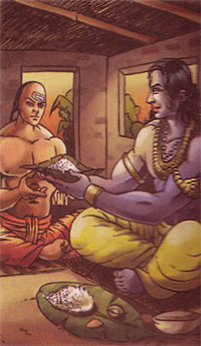 The story of Rantideva in the ninth canto sends the message of selfless giving and compassion. Rantideva was a king in the lineage of King Bharata. He had surrendered himself to God; and hence he never endeavored to earn a living. Since he subsisted just on what came along, there once arose a situation when he had no food or water for 48 days. On the 49th day purely by the Lord’s grace, Rantideva got some porridge. He was about to eat his meal when at first a Brahmana, followed by a Sudra and finally another stranger with dogs come by, asking for food.

All Rantideva saw in each of these people was His beloved Lord. One by one he served them all until there was no food left for himself. Finally, he was about to drink some water when an outcast arrived there, crying for some water.

Overcome by compassion, Rantideva who had neither food nor water for days, happily parted with his last drop. Even during moments of extreme penury, he was the wealthiest when it came to compassion. There was no expectation in his altruism. Out of immense compassion for fellow beings he prayed to the Lord that he did not seek Liberation or the highest Yogic state, but that he would rather take on the sufferings of all embodied souls to relieve them of their misery.

Brahma, Vishnu and Siva who had disguised themselves in different forms to test his fortitude then revealed themselves before him. But Rantideva did not ask of anything from them.

When a devotee sees the Lord in all, Maya which exists in the world as three gunas loses its identity and merges with its source. His vision fixed on the Lord, Rantideva was clearly free from the clutches of Maya.  Such was the exalted state of Rantideva that it is said that his association would make one have exclusive devotion to Lord Narayana.

One Response to "Rantideva’s Compassion and Selflessness"