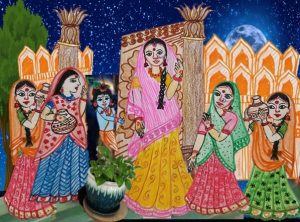 “tava kathAmrutam tapta jIvanam…” {Srimad Bhagavatam, 10th Canto, Chapter 31}
“Krishna your stories are so nectarine, they are our sole refuge and the only basis for our lives.” — So sing the Gopis.

Little Krishna’s navaneetha chourya leelas (His plays of stealing butter) are endless and the Gopis of Brindavan delighted themselves by reminiscing and talking about these sweet, naughty pranks of Krishna again and again.

The Gopis, as they begin to store butter in the pots every morning, would very fondly think of their beautiful Krishna – imagining his moon-like face with butter dripping down his mouth and another big lump in his hand.

In Krishna Karnamrutam, Sri Leela Shuka wonderfully describes this form of Krishna, “abhinava navanIta snigdham ApIta dugdhaM dadhi kaNa paridigdhaM mugdham aNgaM murAreh” (the beautiful form of Krishna, with his body besmeared with freshly churned butter and curd dripping down, while He very happily relishes them and His belly bulging out after drinking all the milk).

Hoping and praying that Krishna would come to their homes, the Gopis would eagerly await to see Krishna’s smart tricks to steal the hidden butter and would end up feeling really very sad and disappointed if he didn’t. So even while complaining to mother Yashoda one can see the joy they had in sharing all these stories like how a loving mother would talk endlessly of the cute little mischief of her own child to a neighbor. And it is this joy which every devotee even now would feel when listening to or talking about the childhood leelas of Lord Sri Krishna.

The 8th chapter of the 10th canto in Srimad Bhagavatam expounds these leelas in detail. The Gopis tried all means to keep the special pot of their best butter within their sight and guard it safely, lest Krishna take it away. They bathed with the pots by their side; milked the cows and even cooked with the pots next to them. But at the end of the day it was Krishna who always ended up having it all, happily enjoying all the butter from the pots. Not only that, He even chuckled cheekily when the Gopis – on noticing that their pot was missing – cursed themselves that they were not smart enough to even remember where they had kept their pot of butter.

The Gopis went and complained to Yashoda. They said, “Yashoda while we are busy with our house work (kAle gopyo yarhi gruhakrutyeshu suvyagrachitaha) your son stealthily creeps in to do all his mischief and when we scold him, he yells back at us (yushathi kurute)”. As the Gopis kept lamenting like this, Krishna stood beside his mother innocently, as if knowing nothing (supratheeko yathaste…), with fear in his eyes (sabhaya nayana sri mukha lokinibhihi) as though he was very afraid. Nevertheless, despite all the quibbling of the Gopis, Yashoda didn’t believe a word of what they said, and only stood admiring her dear, innocent little Krishna.

So the Gopis decided that they must definitely catch Krishna red-handed  and bring him right away to Yashoda; only then would she believe in them. But our dear all- knowing Krishna read their intentions only too quickly and made His bigger master plan. Krishna took infinite forms and went to all the Gopis’ houses to steal butter. He made sure that this time, he was caught by them easily. Each Gopi was elated at having caught Krishna and went to Yashoda’s house, dragging Krishna by the hand. They all reached Yashoda’s house at the same time. But each Gopi could only see the Krishna she had in her hand. When they all gathered there calling out for Yashoda, they were surprised to see each other and all the more stunned when Yashoda came out of her house with another Krishna smiling sweetly at all of them. Yashoda was herself very amused and surprised as to why all of them had come together and that too with one hand stretched out awkwardly.

Suddenly all the Krishnas being held by the Gopis vanished and Krishna now stood with mother Yashoda alone.

All the Gopis were dumbstruck. Yashoda could not help but laugh merrily at their stunned and confused look. She told them, “Please don’t keep admonishing my son. Krishna has no need to steal butter at your homes. I give him enough butter, curd and milk and I don’t want to listen to any of your complaints about my dear son.” Saying this mother Yashoda hugged Krishna and kissed him with a very affectionate smile (prahasita mukhi) and she didn’t feel like chiding Krishna at all (na hyupalabdhum Ichath), says Sri Shuka in Srimad Bhagavatam. Seeing this the Gopis could not do anything. They just heaved a big sigh.

Oothukadu Venkata Subbaiyyar, popularly known as Oothukadu Venkatakavi, is a great Mahatma and an ardent devotee of Lord Sri Krishna as the Kaalinga Nardhana Perumal in the holy town of Oothukadu. Several divine compositions have sprung from him especially on the leelas of Lord Krishna.

This particular scene of Yashoda defending Krishna and retorting to the complaints of the Gopis can be visualized vividly in his song “pEsAdhE pOngaLadi” (in ragam Madhyamavati) composed in the bhavam of mother Yashoda telling the Gopis to go away and not blame Krishna of stealing anymore.

This song is one part of a 3-song set by Oothukkadu Venkatakavi. The first song is “thAyE yashOda” consisting of 8 charanas each describing the pranks of Krishna and the complaints of the Gopis to mother Yashoda. In the second song, Krishna defends Himself with an incredibly smart reply to each of these charges against Him which is conveyed in “illai illai illai ammA”, and the final verdict is made by Yashoda through the song,”pEsAdhE pOngaLadi” where she reprimands the Gopis and supports her dear Nandalala.

In the same bhavam of mother Yashoda, Sri Swamiji has composed this lovely song –“aRiyA siRuvanammA – engaL kaNNan  onDrum aRiyA siRuvanammA” which we shall enjoy this month.

In this song, Sri Swamiji brings the exact arguments of Mother Yashoda – of how she praises and defends her innocent Krishna.

Innocent is our child, O Ladies – Our Krishna
He is one who knows no guile!

You went out of the way to invite Him to your home and gave Him milk and butter
Then how can you bear to call him a thief, without hesitation?

Even after seeing His pure innocent face,
How do you dare to tell a lie?
He is One with wonderful qualities similar to those of the Lord Himself;
Have you all not yet realized the true meaning of this?