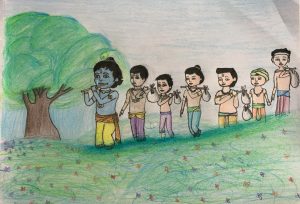 Last month, we enjoyed the go-charana (cow grazing) leelas of Lord Krishna with his friends. This month, we shall enjoy the leela of the Lord on one such day when he gets ready to leave for the forest to enjoy a picnic (Vana-bhojana) with his friends. In Bhagavatham, this episode comes just before the killing of the Aga-sura demon (python).

One day, Krishna woke up with a desire to enjoy a picnic with his friends. Even though everyday Krishna and Balarama had their lunch with their friends, that day was special because Krishna had specifically instructed his friends on what dishes to bring. So, he was eagerly looking forward to the picnic.

On waking up, he blew his bugle and called out to his friends(prabodhayan shringa-raveNa chAruNA) and stepped out on the streets with the calves in front of him(vinirgato vatsa-pura: saro hari:). Sri Swamiji too starts the Madhurageetham saying Krishna is proceeding to Brindavan to graze the cows…(Purappadugindran kannan…..maDukanDru meytthiDa….)

As everybody watched, the little boys came out of their homes (tenaiva saakam pruthukA:…) and joined Lord Krishna with their respective cows and calves. They all looked attractive and carried beautiful lunch bags, sticks, bugles and flutes (snigdhA: sushi vetra vishANa veNava:) In the Madhurageetham, we see Sri Swamiji too describes that Krishna was standing surrounded by his friends (eTTU thozhargaL puDai sUzha), wearing a silk turban(paTTu munDAsu talaiyil paLapaLakka), carrying his lunch bag and stick (kaTTU sAdam kaTTiya kolgaLuDAn)..

The boys had been decorated with various ornaments made of glass, gunja-beads, precious stones and gold (kAcha gunjA maNI svarNa bhUshithA:). Yet, when they went to the forest, they loved to decorate themselves with the fruits, leaves, branches, flowers, peacock feathers and other objects (phala prabAla stavaka sumana: piccha dhAtubhi:..). In the second charana of the Madhurageetham, Sri Swamiji too whose eyes seem to be beholding only Krishna describes his beauty and the ornaments he is adorning.

Thus, the boys proceeded to Vrindavan teasing and playing with each other. Sri Swamiji has described this in the third charana.

They stole and hid one another’s lunch bags. When one boy came to know that his bag was stolen, the others threw it further away. They laughed and teased and then eventually return the bag.

This Madhurageetham reminds one of the Brahmotsav celebration that happened a few years ago in Madhurapuri Ashram. Sri Swamiji along with the little gopas and gopis, did anukarana of this leela. Bedecked with garlands of flowers and leaves, adorning a silk turban, carrying a bugle, stick and a flute, Krishna and the gopas started their journey to graze the cows. Ashram was verily the forest of Vrindavan that day and the little gopas imitated the various birds and animal calls and played various games. In addition to the gopas who took part in the anukarana, all the devotees who witnessed this leela that day in Ashram too enjoyed the same Bliss the cowherds of Vrindavan enjoyed with Sri Krishna in Dwapra Yuga.

The lyrics and the meaning of the song are presented below.

Pallavi
Krishna is proceeding along with his brother, Balarama
To Brindavan to graze the cows
Anupallavi
The Gopis who came running to watch
Stood spell-bound at his beauty enjoying themselves immensely

Charanam
Surrounded by eight friends
Wearing a shining silk turban on his head
His lunch tied to a stick
With happiness, (he) walks towards Bandeera forest

His curly locks falling on his forehead
With the feather of a peacock that dances seeing the rain-cloud, adorning his head
With the body the color of the rain bearing cloud
Adorned with pearl necklaces

Teasing each other
Playing with each other
With the dark colored Krishna enthralling them with his flute
The cowherd boys enjoyed the experience of Brahman!